Love Story is the second quest in a series that involves the Wise Old Man of Draynor Village. It was announced in a Q&A and a Developer's Blog from 12 May 2010.[1] Several things are revealed in this quest, such as why the Wise Old Man has his telescope pointing at the Wizards' Tower; it also reveals more about the Draynor Bank Robbery.

The Wise Old Man of Draynor Village has retired from his long career as an adventurer, following the events of Swan Song. However, the peace* of his retirement is about to be shattered when an extremely unpleasant figure emerges from his past to wreak havoc on him (and you). Prepare to join forces with the Wise Old Man to fight, not just for your lives, but for the reputation of adventurers everywhere.

*It might have been more peaceful if he hadn't decided to rob a bank.

A Damsel in Distress[edit | edit source] 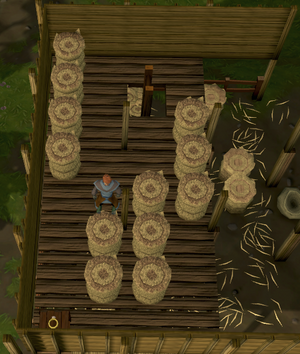 The correct solution to the hay bale puzzle.

Talk to Mabel in the barn northeast of Draynor Village and northwest of Fred the Farmer (directly east of the Draynor lodestone). She will be crying and cannot stop until she gets her ring back, which is just upstairs. She cannot get it herself because she is "too distraught." Agree to help her find the ring and climb the ladder just northwest of her. You will appear in a small maze of hay bales, with the ring at the other end. You can push one or two bales at a time to reach the ring, which is fairly easy. The solution is:

As you take the ring, there will be some explosions and screaming downstairs. Climb back down, only to see Mabel hiding in a sack; she won't come out if you speak to her. There is a woman, Zenevivia, walking around. Speak to her and exhaust all dialogue options, and she will confiscate the ring. She seems to know you and recalls a few quests you've done, such as Swan Song, Garden of Tranquillity, and One Small Favour. Eventually, she will set you on a task: to get her a twig. Search any hay bale to get one and talk to her to give it to her. She will thank you and say no more. Speak to her again. If you ask if you can do anything else, she will ask for another twig, repeating this process. Asking for a reward will really trigger her anger towards adventurers who do quests for random people and expect rewards for them, after which she will reveal that she knows Dionysius (the Wise Old Man) and that she has been following him, but after the events of Swan Song, she decided to follow you. She will then challenge Dionysius and you to a battle to the death so that she can prove that she defeated the two greatest adventurers in the world. You can ask her some questions, but after accepting the challenge, she will teleport away. 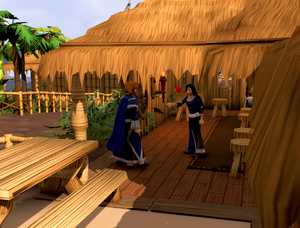 The Wise Old Man meets Zenevivia when he is young.

Go to Draynor Village and talk to the Wise Old Man, who will know Zenevivia and reveal that they used to be lovers and that he misses her a lot. A cutscene will show their meeting, adventures and break-up (a fight to the death). He will tell you to meet him outside, and then he will follow you to Rimmington. Talk to him outside his house and agree to go. He will follow you as you walk, and will also follow you if you use the lodestone teleport to Draynor Village, cabbageport or a skill necklace to the Crafting Guild. However, if you go too far off course, he will return to his house. Talking to people like the Guard in tree results in humorous conversations. Go to Rimmington, specifically the house portal, and talk to Dionysius. Make sure he is in position and not following you or you will not be able to enter the house. He will attempt to get into his old house but will not be able to because Zenevivia has removed it from the Teleportation matrix so that it cannot be entered (otherwise you two could enter in Building Mode and delete everything). He will tell you to meet him in the house of Hengel and Anja, "friends" of his. He will also tell you to bring a chisel. Even if you have one already, he will go to the house (resulting in a humorous thought). Go to Hengel's house just east of the portal and talk to Dionysius. Ask him what to do and he will explain the technique of chipping teleport tablets to reach the magic inside and modify the teleportation location. He will give you 100 tabs and you will use the chisel on one of them to chip it.

Dionysius will then tell you to open the tablet. Do so, and a puzzle will appear. There are two tablet halves; start with the bottom one. Drag the connections from the left onto the tiles in order to lead the magic from the yellow dot at the bottom of the half to a point at the top. You can remove a tile by using its right-click menu. Black squares, which are dead zones, have been harmed by chipping and can no longer conduct magic. The same goes for the upper half, which is a bit tougher. The screen will close when the solution is correct. 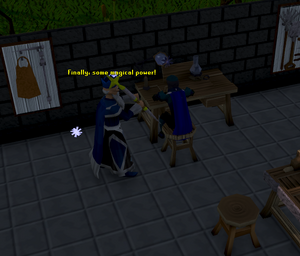 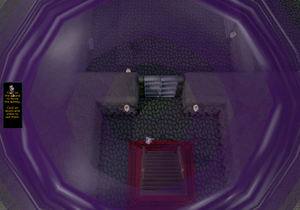 If you leave the house at any time, you must re-chip another house tablet and break it near Dionysius in Hengel's house. In addition bring two combat styles.

Stand next to the Wise Old Man and break the chipped teleportation tablet. You will be teleported to Zenevivia's house, which she's completely renovated.

The house is not safe. If you die, your gravestone will appear in Rimmington, outside the house portal, and you will arrive at your respawn point. A quick way to get back is to use the Port Sarim lodestone and run west.

He will comment that she has redecorated, and that you have to go through the dungeon to reach her. Go east to the dungeon and tell him to go first. A short cutscene will show him getting injured by a trap. He will tell you to bring a steel and mithril bar and two oak planks. If you had them already, another humorous conversation will take place. Use the steel bar on the clockmaker's bench in the workshop, just north of the entrance, to make a clockwork, then talk to Dionysius about what to do next. He will suggest you make a dummy to confuse and disable all the traps. Sit behind the bench and make a dummy, then put it in the dungeon. The controls are easy; it's just like normal walking.

During this part, there will be a pulsating purple light around your screen, as seen on the picture. Any players sensitive to flashing lights should proceed with caution. An update on 19 July added an interface to reduce the light's frequency. If you suffer from vertigo, you can still be affected and breaks may be needed.

Deactivate all the traps by walking on them and then return to the surface. You can attempt to use the stairs in the last room, which will cause The Wise Old Man to offer to return the dummy immediately. Alternatively, you can choose to walk it back through the rooms yourself and back up the first set of stairs. You can now safely enter the dungeon and fight your way to Zenevivia. 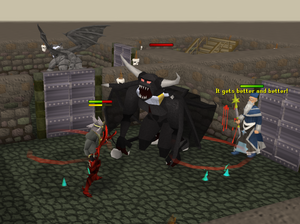 You and the Wise Old Man battle through the dungeon.

Enter the dungeon and enter the first room. The monsters are not aggressive, but will begin fighting after Dionysius has attacked them, which he does almost immediately. He can hit high in the 100s, not only on the lower-levelled monsters but also on the dragon.

Now enter the final door and talk to Dionysius, who will want to make up with Zenevivia. If you are ready to fight, go upstairs.

After talking to Zenevivia, you can teleport out to prepare for the last fight. You won't have to fight the monsters again.

Talk to Zenevivia - Dionysius will try to talk to her, but she is too angry with him and starts the battle. Melee is recommended for the statue phase, while ranged or mage can be used for the more mobile ground phase. 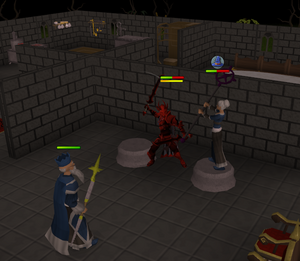 Standing in between the two plinths like in this picture, or between the statue and the wall is a good strategy to keep from being pushed back. She can then be attacked with any melee weapon.

Firstly, she will attack both you and Dionysius with Blood Barrage, which can hit high AND heal her, so use Protect from Magic at all times. Secondly, she makes flames appear on the square the player is standing on, so moving around will help avoid being damaged by them. She will summon flames every few seconds and they will very rapidly hit 300-400 life points every game tick, which cannot be blocked. Eat when necessary and continue attacking her.

When she yells "Aha!" she will enter another phase of the fight. She will first create a fire around her, destroy one of the statues, and teleport onto it. At this point, she will use Protect from Missiles if attacked with range and Protect from Magic if attacked using spells; however both prayers appear to block most non-melee attacks from the player. Dionysius can still damage her, although his damage is not as reliable. During this phase, she will also cease to attack but will still summon flames about every second. The easiest way to end this phase is to use a knockback attack such as kick with a melee weapon, but otherwise the flames can be dodged by simply running around the room while getting in occasional damage, and when she's lost enough health, she will teleport back to the ground.

On the ground she can be attacked again until she goes to another statue plinth, which happens about four times. After the last statue, she will still attack with Blood Barrage; her flames will become less frequent (one every ~6 seconds) but will cover a larger area, about 6x6 squares. Run from one side of the room to another while shooting arrows at her. When she is defeated, she will be on the ground in front of the throne and you can talk to her. 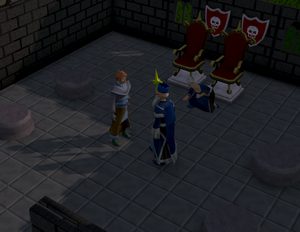 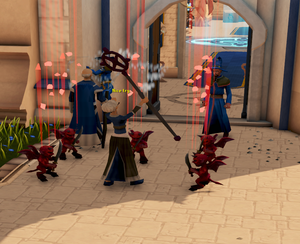 After you have defeated her, Dionysius will tell her about the Draynor Bank Robbery and that he is a self-centred battle-mage like her, and she will confess also having missed him and they forgive each other. There will be a cutscene and you will return to Draynor Village. Ask Zenevivia about Mabel's ring. She will inform you that she and Dionysius will plan to rob the Wizards' Tower to replenish their depleted supplies, and they tell you to watch from the telescope. She will also not give you the partyhat Dionysius gave her as "borrowed items cannot be traded". Go upstairs and look through the telescope and watch the Wizards' Tower Robbery. After defeating all the wizards, they are attacked by a giant familiar Thingummywut, summoned by the seemingly incompetent Traiborn. Players cannot see it, but they can see the incredibly rapid Earth Surges it uses to attack. Upon their return, ask about the robbery and then for Mabel's ring, and your rewards will be given and explained to you. 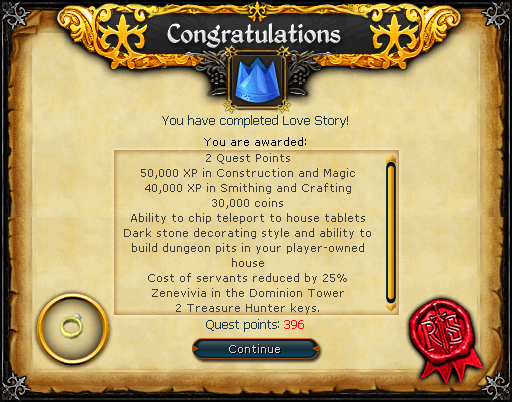 Unlocking the rewards below is a master quest cape requirement:

Love Story is not currently required for any quests or miniquests.