From the RuneScape Wiki, the wiki for all things RuneScape
Jump to: navigation, search
For the current lord of House Jovkai, see Lord Alexei Jovkai.

Lord Jovkai was the vampyre lord of House Jovkai, a house that rivalled House Drakan thousands of years before the start of the Sixth Age. After defeating House Drakan in battle, he was invited to their camp to discuss reparations, as was the custom.[1] Lord Jovkai humiliated them by moving into their camp and treating them as servants.[2] Vanescula Drakan was upset with this treatment and slowly poisoned his wine cups so that he died within the year.[3] Vanescula recalls this treatment as being the impetus for House Drakan's future victories, since it upset them so much and they refused to go through it again.[4] She tells the player the story of Lord Jovkai after her defeat at the end of River of Blood, warning the player that, although they won the battle, if they attempted to humiliate Vanescula like Lord Jovkai did, they would meet a similar fate.

House Jovkai survives to the present day under the leadership of Lord Alexei Jovkai. 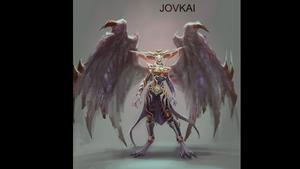