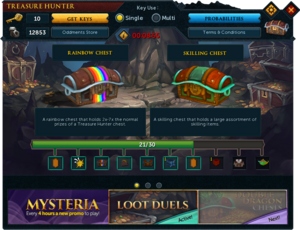 The interface for Loot Duels.

The different chests that can appear are:

The following table lists chances before the available chests are rolled, and omits any effects that the chests might have.

When opening the chests during the promotion, a bonus bar fills, providing the following rewards at certain thresholds. The bar is completely filled at 30 chests opened, at which point a new bar starts with a new set of rewards. The following table lists the rewards for the first 150 keys (the bonus bar will repeat itself with rewards from keys 123–150, looping infinitely).