From the RuneScape Wiki, the wiki for all things RuneScape
(Redirected from Lookout Ekahi)
Jump to: navigation, search
Loading...
Cap'nIn combatLookoutUndead

Cap'n Ekahi (Lookout Ekahi after Head of the Family) is a cyclops pirate captain who can be found on south-east Aminishi. He plays a role in the Head of the Family miniquest, where he captains a ship for the player to transport the Aminishi moai to Waiko, with two Cyclops labourers. At sea, the trio attempt to kill the player but fail. They are all spared, and Ekahi decides to serve as the player's lookout afterwards.

Sometime in the past, Jed saved Ekahi's life, and Ekahi decided to serve Jed after this incident. After becoming the lookout, Ekahi leads the player to Jed, knowing that they are kinder than Jed, under the promise that they do not kill him. Ekahi "kills" the player to get coordinates to Jed, and when the Thalassus eats Jed when he attempts to bail ship, Ekahi still stays by the player, believing that Jed was killed by the will of the sea and not the player. 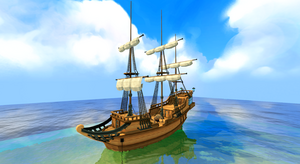 Ekahi plays a major role in Eye for an Eye, having returned to his home of Cyclosis, where he learned that cyclopes were disappearing at night. He volunteers to be a lookout alongside the player. When zyclopes attack during the night, he keeps watch while the player deals with the zyclopes. The next night, he encountered Jed, having become undead. Jed drains Ekahi's life force before the player intervenes, starting the zombification process, and causing the rest of the crew to attempt to find a cure for his affliction. When rumberry elixir and positive energy fail to cure him, the crew attack the Harbinger directly, capturing Captain Cora and forcing her to realise the truth about Jiangshi. After Jiangshi is killed, Ekahi is cured of his affliction.

This information has been compiled as part of the update history project. Some updates may not be included - see here for how to help out!
Retrieved from ‘https://runescape.wiki/w/Cap%27n_Ekahi?oldid=35544271’
Categories:
Hidden categories: