From the RuneScape Wiki, the wiki for all things RuneScape
Jump to navigation Jump to search
Locked chestOpened chest? (edit)? (edit) 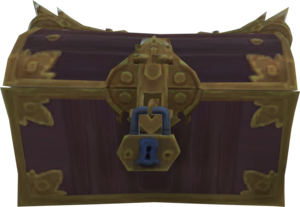 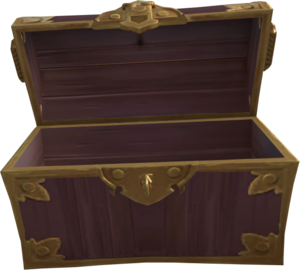 The locked chest refers to two separate chests that can be found in the tunnels of the Warforge Dig Site. Attempting to open either chest prompts a four-character-long combination lock.

The first chest can be located in the tunnels, south of the Big High War God shrine excavation nodes. The password is K-I-L-I, in reference to Kili, who was ostensibly the partner of the Thalmund, the Dwarf working in the Warforge, as mentioned in his letters in the Heart of the Forge mystery. Inspecting the chest after unlocking it grants the player with 50 each of noted malachite green and vulcanised rubber.

The second locked chest located behind Bandos' throne, which requires level 100 Archaeology to access. The combination to unlock it is H-E-B-E, possibly in reference to the Icyene Hebe. Inspecting the chest after unlocking it grants the player with 50 each of noted warforged bronze and Marks of the Kyzaj.

Once a locked chest has been opened, it will become an opened chest. If inspected, the player will perform the Cheer emote, and will be given the following message:

"You already figured out the combination to this lock.
I guess you want a pat on the back? You're very clever. Well done."

This information has been compiled as part of the update history project. Some updates may not be included - see here for how to help out!
Retrieved from ‘https://runescape.wiki/w/Locked_chest?oldid=35716473’
Categories:
Hidden categories: