From the RuneScape Wiki, the wiki for all things RuneScape
(Redirected from Lobby)
Jump to: navigation, search
"Lobby" redirects here. For the fish sometimes referred to as "lobby", see Lobster.

The RuneScape Lobby was introduced on 3 March 2010, along with the updates of Constitution, the iron smelting, and the Shattered Heart. It replaced the previous welcome screen.

Upon a successful log-in, players are put in the lobby. Players may see which worlds friends are online in, join a clan chat, send private messages, and read news articles. The lobby also allows for the changing of graphics settings, sound settings, and account information. It was proven useful during Bonus XP Weekend because it allows players to hang out while waiting for trees to grow, awaiting offer completion through the Grand Exchange or for Dungeoneering team mates to log in without losing XP multiplier. 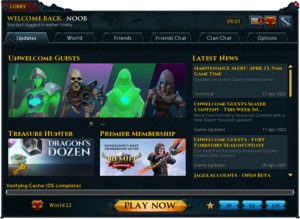 After logging in, the player is shown a screen - shown below - where they can check and change email settings, recovery questions, check their inbox for messages, see the date and time that their membership credit will run out (before the Elemental Workshop IV update, this showed the amount, in days, of membership credit remaining), and view one of the current promotion banners which directs to the corresponding news item, if available.

If the player does not have a registered email address, has not set recovery questions, has not paid for membership credit, or has unread messages, red crosses will be shown next to the respective notification (see membership in the associated picture) rather than green ticks (see email registration, recovery questions or messages in the associated picture).

To start playing, the player can select one of their favourite worlds in the lower right hand corner, or click the 'Click Here To Play' button to be put in a suggested world, if they choose not to select one manually.

Using the tabs at the top, the player can also see chat from friend and clan channels, but not from public chat. Options can also be changed using these tabs. 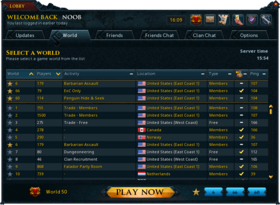 The World Select is similar to the previous World select, however, you can change worlds without leaving the game. This means you do not need to re-enter your username and password. The filter arrows (which are the arrows under World, Players, Activities/Locations, Type, CoinShare/LootShare, and ping) filter out the worlds you want. The up arrow gives you the highest number, sort by alphabetical order (for location/activity), and/or member worlds while the down arrow gives you the lowest number, sort by reverse alphabetical order, and/or non-member worlds. Please note that you can filter the types of worlds (non-member/member) and other filter arrows at the same time by clicking a filter arrow in any category then clicking the non-member/member filter arrow. The Green highlight is your favourite worlds (It’s always at the top of down-right corner even while in other tabs). Ping is a lag meter. The lower the ping number, the less lag a world has. The orange highlight is the world you have selected, and the grey-white highlight is follows your cursor. The white text is for non-member worlds while the yellow text is for members. This can be useful for finding worlds on a particular server or which are dedicated to a specific activity. 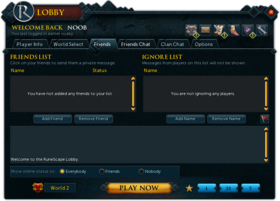 This displays your friends list, ignore list and the chat box, which lets you talk to your friends whilst not actually logged into the game. The report abuse button is also present on this interface allowing users to still report abusive users should any arise. Just like in-game, if someone of your friends list logs in or out you are notified in the chat window below the Ignore and friends lists. Currently, some characters cannot be used in lobbies, such as < and >. Also you are not able to click a specific part of your message to change it like you can in-game. 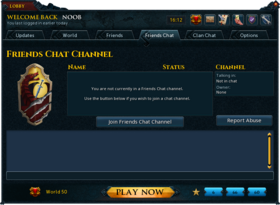 This is almost exactly the same as the Friends Chat in-game. However, users will not automatically join their last Friends Chat nor are they required to start their message(s) with "/" to chat. Users also cannot change their friends chat settings from the lobby. 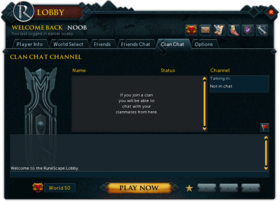 It is similar to the Clan Chat in-game, and it is automatically joined. Players do not need to add "//" to their messages. Users cannot change settings or invite users while in the lobby, they are only able to chat, ban/kick players, and check the player's ranks. However, those who are able to kick users from the clan chat can do so. 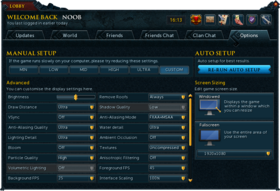 Gives you the options just like in-game and in the previous options menu, except the Animated background Button, which can change the picture to the sites of Gielinor. The animated background shows images of Daemonheim, and other places. In the Options Screen, some of the options are to: To fit the screen with Fixed, Resizeable, or Fullscreen mode. You may also change the graphics settings, sound options and some more.

When players exit to the Lobby, their scores are updated just as if they had logged out. The player will stay logged in for up to an hour in the Lobby. However, when re-entering the game from the Lobby they will not have to re-enter their name and password.

When players press the X on the top right corner of the Lobby, they move to the title screen. To return to the Lobby, you must then wait for a short amount of time then log back in, using your account details.

The Instant Demo was a game mode that was made to give people a chance to play on a smaller world with fewer quests without having to sign up. The option to play on the instant demo was introduced on 29 March 2010 on RuneScape affiliate sites such as Miniclip. Once accessed, the instant demo was unlocked on the official RuneScape website. Players got access to 9 quests and a restricted world and their progress was saved to their computer, however, players did not have access to several main features including chat (Quick chat was available). During the tutorial, the player was known as 'Adventurer'. However once in game, this changed to 'Player #' (Where # is changed to a random number). Instant Demo was played on world 901. On 9 June 2010, the ability to start an account in instant demo was removed, but players who already had an active account could still log in until it was removed completely on 6 October 2010.