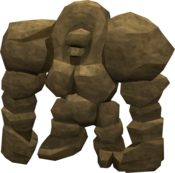 Living rock protectors can be found throughout the Living Rock Caverns. They attack with melee and are inaccurate for their combat level; a player with good armour and a decent Defence level will not find these monsters to be too big of a problem. In addition, they are aggressive, but the player actually has to be right next to them in order to be targeted. Thus, if enough care is taken, a player could navigate around the living rock protectors without being attacked at all.

Upon death they turn into living rock remains which may be mined for living minerals. The minerals are used as bait for fishing rocktails which are also located in the caverns.

Although the living rock creatures are all high-levelled, they can be killed fairly easily, as they have low max hit, accuracy, defence, and attack speed.

A player with high levelled Magic can easily take these out with the water surge spell and use of the basic ability Combust in very little time, making this a very fast and easy Slayer task.

Players can quite comfortably tank these monsters for trips of at least one hour with a decent set of armour and an inventory of food. These monsters are extremely inaccurate for their combat level, which greatly increases the ease with which a player with a higher defence level can fight them and sustain little to no damage. Using a set of mid-level magic armour negates the need for food almost entirely.

One way to stay here for very long is to bring a Bunyip familiar and lots of swallow whole scrolls and fish either cavefish or rocktail and eat them with the scrolls. However, this requires 85 or 90 Fishing and 88 or 93 Cooking, respectively.

Many players fight these for their average drops, but players with high Mining and Fishing kill these creatures to obtain bait for rocktail, which is one of the best pieces of food in Runescape.