Livid Farm is an activity released on 4 April 2011 in which the player helps Pauline Polaris run and maintain her farm. The farm is located on the northern part of Lunar Isle. The farm is tended to by casting Lunar spells, and experience is gained in Magic, Agility, Construction, Crafting, and Farming. Working on the farm earns produce points which can be used to unlock new Lunar spells, and, after every spell is learned, wishes that affect training with certain Lunar spells.

Lokar Searunner approached Pauline after a sea adventure to Karamja, where Papa Mambo gave the crew of the Lady Zay some jade vine sprouts. Lokar brought these to Pauline and asked her to grow them. He called them L.I.V.I.D. (acronym for Lunar Isle Vine is Dangerous) However, due to the danger of the plant and the nature of Lunar Isle, Pauline cannot tend the plants by herself.

The goal of Livid Farming is to gain produce points. There are a set number of activities but they reset every 60 seconds and with practice it is possible to complete all of them during a 60 second round. However, there are no completion bonuses or other reasons to complete every cycle other than maximising your points per minute.

You also earn Magic and other experience. The Magic XP is the same as you would earn with a normal Lunar spell (with the same cost in runes), however you earn additional XP in other skills as well, depending on the activity.

Players without the required Magic level to cast all the spells can still participate in Livid Farming, but doing so earns no Magic XP for that activity and half the normal produce points of the activity (fertilising earns 10 points instead of 20, depositing a bundle earns 60 points, and so forth). If you do not have the Magic level to do a particular action, it may be worthwhile to use a magic potion or vecna skull to boost yourself to the required level.

You may check the possible awards for your levels by right clicking Pauline and selecting rewards, then selecting the tab Tasks. This tab will show if you will gain Magic XP or not as well as produce points earned. Your points can also be revealed using quick chat when you say "I've helped Pauline with X produce."

No skills can be assisted or boosted

Requirements to complete all the activities with full points and Magic XP:

Requirements to complete all the distractions:

Runes used for distraction are not refunded, but do reward produce. Because of this, it is advised to bring as many as possible of the following runes:

Entering the Livid Farm for the first time can be intimidating. The other players will be very busy with no time to chat. However, since there is no completion bonus, there is no reason not to take your time while you are getting to grips with the activity.

Looking around will show you the rows of Livid plants. There will be three empty plots and three sick livids among the healthy ones. Further examination of the farm will always show two fence sections that need fixing (along with a place to get lumber from) and will sometimes show livids in a bin ready for stringing (when there are no livids in the bin, Pauline needs "encouraging" instead). Every 60 seconds Pauline will reset the game and the empty plots and the sick livids will change position, and new sections of fence will need repair.

Almost all activities within the Livid Farm are left-click, and hovering the mouse will always show if a left click activity is possible. The simplest activity is fertilising an empty plot that takes only a single click, however all the activities can be completed in two or three clicks. If you attempt an activity and fail (for instance, encouraging Pauline when she does not require it), you will not waste any runes. It does not matter if you start an activity in one cycle and complete it in the next (except in the case of curing a sick livid, where because they have all changed, you will be unable to cure your chosen and now non-sick livid).

If you have only the minimum magic level required to enter the farm, only curing the sick livids will earn you full product points and Magic XP. However all activities can be undertaken for reduced benefits.

There are a number of activities that need to be done around the farm that earn produce points.

If you do not have the required Magic level the produce points earned will be halved. The maximum produce points that can be harvested is 430,000; going above this will give you a message to spend some points.

A Livid farm point enhancer will allow the player to gain produce points at 1.5 times the normal rate.

Counting nature and astral runes, and using a mud staff, the cost of produce points per rune is:

Each activity also provides experience in magic and one other skill.

Players who do not have the required magic level to cast a spell do not earn any Magic experience, but will earn the full Farming, Construction, Crafting, or Agility component of the activity.

Due to the fact that the only elemental runes used routinely on the Livid Farm are water and earth runes, equipping a mud battlestaff to provide an infinite supply of both will make spellcasting cheaper overall. A staff of earth alone may be a sensible compromise if this is not possible, due to water runes only being used in one spell.

The "Loss Per XP" figures in the following table is based on a specific task's total experience - i.e. not just magic or just Farming/Crafting/Construction/Agility (depending on the activity). However, the "Loss Per xp without magic level" figures are useful in two cases - if you do not have the Magic level to earn Magic XP, and if you want to ignore the Magic XP gained in order to compare just the cost of gaining the secondary skill XP. 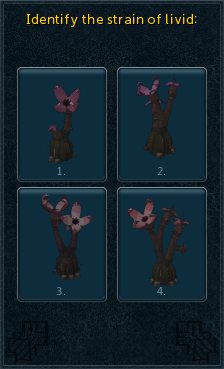 New players will often waste lots of time at guessing the right shape of a diseased Livid. With some practice, however, a player can easily identify a diseased Livid. The four strains as displayed in the minigames interface are as follows:

Select the matching diseased Livid from the minigames interface window. Picking the wrong option does not consume runes.

Alternatively, since there is no punishment for choosing incorrectly, you can simply press 1, 2, 3, and 4 on your keyboard all at the same time, and the selected livid will be cured.

Livid plants might appear in black and white if the graphic is set to Software or Safe Mode.

If a player is having any difficulty identifying and matching the strains, it is possible to memorise the positions. When a diseased livid appears in a given patch location, it will always be of the same strain. 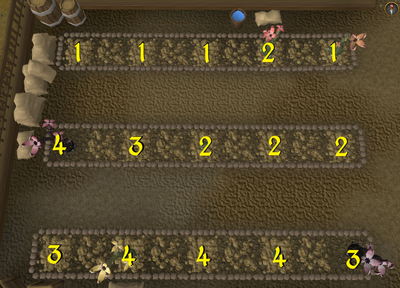 The positions and matching strains of the Diseased livids

The Livid Farm works in rounds, each lasting one minute. Five rounds comprise a cycle.

Each round allows the player to perform 3 plant cures, 3 soil fertilisation, and 2 fence repairs, and either to encourage Pauline or to bundle 10 livid plants into 2 bunches of five. Every cycle follows the same pattern, allowing the player to encourage Pauline on the first, second, and fourth rounds, and to bundle livids on the third and fifth rounds.

For the fastest time, encouraging Pauline is best done after the three-patch fertilisation and livid curing with spam-clicking each activity in advance.

This strategy earns a maximum of 18,960 points per hour.

Alternate slightly faster way is to do home world hop method, the goal is to collect, bunch and deposit produce every cycle by hopping worlds, make sure you have something to note down worlds and number it from 1-5.

Presuming the maximum activities per cycle, the following is a calculation of experience per hour in each skill:

Assuming the player starts the Livid Farm with at least 91 Magic (or lower with boosts being used when necessary to gain full experience), by the time they have unlocked the final spell, Borrowed Power, with 430,000 produce points, they can expect to have earned (not including distractions):

While helping Pauline out along the farm, a number of distractions may occur. Dealing with these distractions are completely optional and reward the standard Magic XP and produce points upon completion (plus you get back the runes you cast, with the exception of losing a single death rune). If you chose the wrong options, you lose all the rune rewards.

Players can complete these diversions even if you don't have the required level, but you won't gain any Magic experience for it.

A sick Ibis appears. Cast Monster Examine on it, and then tell Meteora what is wrong with it.

A Suqah appears and attacks the farm. Help Pauline defeat it by right clicking on her and selecting encourage.

Murky Pat is around the farm. Cast Vengeance Other on the character talking to him, and be sure to pick the correct dialogue option.

The Livid Farm offers a variety of new spells for the Lunar spellbook and temporary boosts known as 'wishes'.

A spell is gained when the player's Produce reaches the required level and the player claims the reward from Pauline. The produce points are not spent until the final spell, Borrowed Power, is obtained. This means that, for example, the 35,000 points for Teleport to South Falador are not spent when the spell is obtained, so it takes only 35,000 additional points to earn Repair Rune Pouch at 70,000 points. However, to unlock Borrowed Power, a total of 430,000 points are deducted from the player's point total.

Additionally, once players have unlocked Borrowed Power, they can talk to Pauline via the NPC Contact spell.

Each spell takes on average 2 hours play to unlock.

Once players unlock Borrowed Power, their point total is reduced by 430,000 points and they can start spending points on wishes. 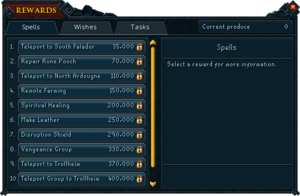 For a player at or above level 91 Magic, unlocking all the Lunar spells requires a total of approximately 2690 rounds or 538 cycles. This takes a minimum of 22 hours and 40 minutes and requires the following runes:

It is recommended to unlock one to two spells a day to break up the monotony. Additionally, players might want to wait for the Travelling Merchant to sell livid plants, which can be redeemed for produce points, in order to unlock all the spells without spending much time at the farm.

For tables of the runes and cycles needed and XP gained at different magic levels, see Calculator:Livid Farm.

Unlike the spells, wishes always cost produce points. To gain access to wishes, the player must first unlock the final spell Borrowed Power. These boosts will last only for a short time, but have useful effects. Wishes require no runes. As the rune cost from gaining produce points from the farm or the Travelling Merchant is higher than what is received from many of the wishes, the money making wishes are useless unless you are playing in ironman mode.

Assuming the maximum activities per cycle, and the use of a mud staff, the cost of runes at GE price is: