From the RuneScape Wiki, the wiki for all things RuneScape
Jump to: navigation, search
Wikipedia also has an article on: wikipedia:Leviathan
This article is about the sea monster spoken of in Gielinorian lore. For others uses, see Leviathan (disambiguation). 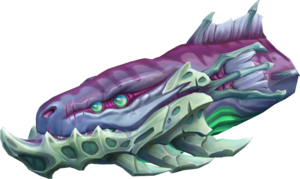 The Crassian Leviathan from the Shadow Reef.

A leviathan is a sea monster spoken of in Gielinorian lore. There are some legends surrounding leviathans, although there are few concrete facts regarding it.

In the RuneScape novel Betrayal at Falador, the character Castimir mentions that at one point he stayed in Catherby on his trip from the Fremennik Province to Taverley. Apparently the fishermen and sailors of Catherby told him what they claimed were true stories, some of which included flying fish and massive leviathans.