Skill mastery is achieved by reaching level 99 in any skill. Level 99 is achieved by reaching 13,034,431 experience in a skill, except for Invention (36,073,511 experience to reach skill mastery). Level 99 is the maximum level in most skills. Dungeoneering, Invention, Slayer, Herblore, Farming, and Archaeology are the only skills with a maximum level of 120 (referred to as true skill mastery), achieved at 104,273,167 experience for Dungeoneering and 80,618,654 for Invention. The current maximum total level is 2,898 (level 99 in all skills and level 120 in Dungeoneering, Invention, Slayer, Farming, Herblore, and Archaeology). When level 99 is reached in any skill, there is a different fireworks animation that can be heard by everyone nearby.

Members reaching level 99 in a skill are entitled to wear a skillcape. These capes can be bought from a specific skill master for 99,000 coins. Every skillcape gives access to a unique emote. Furthermore, they can be used to boost the corresponding skill's level to 100 for a short time. Every skillcape has its own unique perk, some of which can be activated by right-clicking on the cape; others are passive. If the player reaches level 99 in more than one skill, the player's skillcape becomes trimmed, and any additional skillcapes the player obtains will also become trimmed.

A player gaining level 99 in a skill

Achieving level 120 in Dungeoneering, Invention, Slayer, Herblore, Farming, or Archaeology, reaching 99 in every skill, or earning the right to wear the Completionist cape or its trimmed version will be announced on all of RuneScape's servers by default in red text. Being the first to achieve a milestone on either a regular, ironman, or hardcore ironman account also grants a global broadcast: Congratulations to [Player] for being the first to reach [level] [skill]!

When a player achieves a 99 and their private chat is set at least on 'friends', it will be announced in green text to all logged-in players on their friends list regardless of whether they are on the server.

When level 99 skills first started appearing, players with such stats were often well known around the RuneScape community since they were one of the few to have achieved a skill mastery.

Below is a chronological list of the known first players to reach level 99 and level 120 in their respective skill. 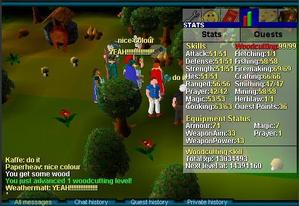 The first player to reach level 99 in any skill and in Woodcutting. 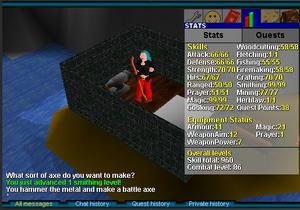 The first player to reach level 99 in Smithing. 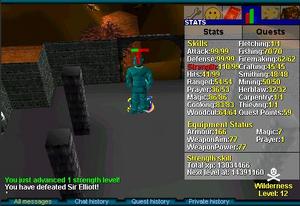 The first player to reach level 99 in all melee stats. 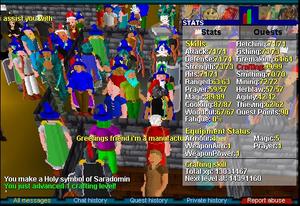 The first player to reach level 99 in Crafting.