From the RuneScape Wiki, the wiki for all things RuneScape
< Legiones
Jump to navigation Jump to search

95+ Slayer
You need 95+ Slayer (boostable) to enter the boss arena.

Weak to Ranged
It is recommended to use Ranged weapons.

Melee immune
This boss is fully immune to melee damage, which means you have an extremely low hit chance using melee weapons.

Magic immune
This boss is fully immune to magic damage, which means you have an extremely low hit chance using magic weapons.

Slayer helmet
This boss counts as a slayer task for 'Ascension members'. The slayer helmet provides additional damage and accuracy if you are on task.

Poison immune
This boss is immune to poison. Cinderbane gloves and weapon poisons do not deal additional damage.

Hexhunter susceptibility
The hexhunter bow deals +12.5% ability damage and has a flat +10% hitchance when used against this boss.

The Legiones are six bosses that can be fought in separate chambers within the Monastery of Ascension. An ascension keystone corresponding to the legione that you wish to fight is required to enter the chamber. Additionally a Slayer level of 95 is required to enter, but this is boostable and is only required to enter the chamber and not to attack the boss. Legiones have a passive damage reduction aura where the the player's attacks deal less damage the further away that they are from the boss. You should aim to stay within 3 spaces of the legio when possible to maximise damage dealt.

All the Legiones use a standard magic attack and a special lightning strike attack. The lightning attack will first strike the player's current spot and then on the first spot that the player clicked on when moving from their initial spot. It initially covers a 2x2 square area and expands to a 3x3 square and then to a 4x4 square over two game ticks. If hit by this attack the player will be dealt a high amount of damage based on their proximity to the lightning strike: if you are in the centre of the attack then you will be dealt 2,200-2,400 damage every 1 tick; if you are within 1 tile of the centre then you will be dealt 1,800-1,900 damage every 1.5 ticks and if you are anywhere else in the attack area then roughly 1,400 damage is incurred every 2 ticks. Damage taken by this attack is not reduced by the normal amount by protection prayers/curses, instead only around 200-300 damage reduction is granted. With the exception of Legio Secundus and Sextus, all Legiones perform this attack twice before using a magic auto-attack. 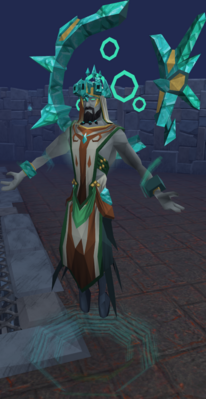 Unique ability: the lower life points he has, the more damage that he will deal. For every 25% life points that Primus loses, his lightning orb attacks gain 200 extra damage. 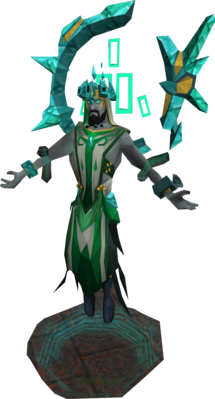 Unique ability: Secundus uses the lightning orb attack more frequently as his life points decrease. At 75% health, he will use three orb attacks, then one basic magic attack. At 50%, he uses a simple magic attack every four orbs, and at 25% he will exclusively attack with lightning. 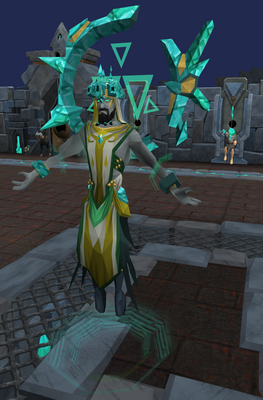 Unique ability: Tertius summons Monastery of Ascension units as his health decreases - 3 Rorarii at 75%, 1 gladius at 50% and 1 Capsarius at 25%.

The ascended spawn under Tertius, so they can be damaged easily with Corruption Shot and Bombardment. The gladius can be somewhat problematic, but since Legiones take increased damage the closer the player is to them, the gladius is unlikely to move out from Corruption Shot and Bombardment will only force him to move away from the pile. Should he be able to land a stun, immediately use Freedom and quickly move away before the lightning attack strikes.

The capsarius can be much more problematic than the gladius as it will heal the wounded Tertius, though she may also focus her attention on the wounded rorarii or gladius if they have been struck with AoE abilities. The most effective and successful tactic is to simply use Binding Shot or Tight Bindings on the capsarius as soon as Tertius summons her, to ensure she doesn't move out and start healing him. It's possible to take Tertius out before the capsarii heals him, but can be hard to pull off consistently.

Any remaining minions after Tertius is killed with die off.

If killing ascension members as a task and wishing to gain as much experience as possible, it is recommended to avoid tagging the rorarii or gladius as they will die off and be counted towards task completion if the player hurts them. It is also recommended to quickly kill Tertius if possible so that the capsarius does not need to be tagged. 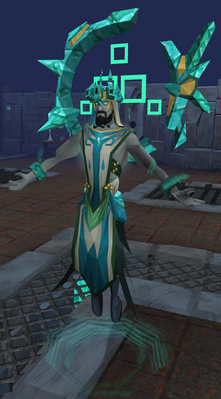 Unique ability: Quartus teleports the player next to him when he reaches 75%, 50% and 25% life points and launches an additional lightning attack at/around the spot that he teleported the player to, on top of his regular attacks.

Quartus is the only Legio where damage should be dealt carefully, as his ability can punish fast DPS players. It is important to give Quartus at least three tick's worth of recovery to prevent him from dragging the player back into the same zone, where the player will be immediately hit by a dead-centre lightning strike and dealt massive damage. Waiting will prevent this from occurring. Quartus' drag is unique compared to other monsters: Freedom and Anticipation do not work against it, as it isn't classified as a stun attack. The pull also grants him a second of invulnerability, and any channelled abilities used when he drags the player are may be put on hold or even cancelled out. 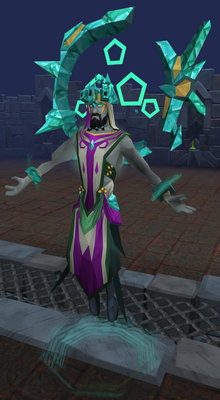 Unique ability: Quintus summons "Lines of Ascension" when he reaches 75%, 50% and 25% life points. At 75 and 25% health the lines will run horizontally (west to east) across the chamber floor, and at 50% they will spawn vertically (north to south). Stepping on one of these lines will deal around 2,700 magic damage, though it only hits once each time the player runs into a tile occupied by these lines.

It is worth noting that the player can "force" the lines to spawn as when he reaches the trigger point to spawn them, a line will spawn wherever the player is currently at. Standing near the edges of the laboratory at this point will spawn the lines out of the way of the player, but because the Legiones take less damage the further away the player is from them while this is done, it is only recommended for lower levelled/inexperienced players.

The "Lines of Ascension" are similar to the Queen Black Dragon's fire walls in that if you stand next to a line and then run over it, you will not take any damage from the line itself. This can allow for easier manoeuvrability around him to deal maximum damage without having to bring him closer. 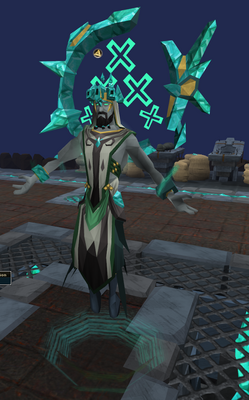 Unique ability: Sextus uses does not have a unique attack that is triggered by his health decreasing. Instead, throughout the fight, his lightning attacks last significantly longer than his fellow Legiones, as they only start to dissipate once three strikes are on the field. In addition to the increased duration of these attacks, their AoE is increased from 4x4 to 5x5. Sextus has a larger laboratory area which gives the player more space to avoid these attacks.

Players should engage the Legiones using the hit-and-run tactic where they attack the Legiones while they keep running around. This will allow them avoid the lightning orb attacks most of the time and help conserve food. Except for Quartus and Legio Quintus the unique abilities of each legio can be ignored: use the strategies outlined above to deal with the special abilities to these two legios when they occur. It is best to eat up, especially if you are a lower level or inexperienced player, to avoid

Greater Ricochet, with a Caroming 4 switch, can instantly clear one stage when within optimal range. Snipe and Rapid Fire are also useful for dealing heavy and/or quick damage - if nightmare gauntlets and fleeting boots are not being used, make sure to use Devotion first.

Instead of a farsight sniper necklace and Soul Split, Protect from Magic along with Rigour can be used in combination with an amulet of zealots for faster kills and slower prayer drain overall compared to using Soul Split and Anguish. However, this will require more food if the player is hit too much from their lightning attacks.