From the RuneScape Wiki, the wiki for all things RuneScape
(Redirected from Legacy interface)
Jump to navigation Jump to search
"Legacy" redirects here. For the quest, see Legacy of Seergaze. 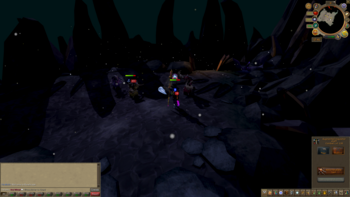 A player fighting Muspahs in Legacy Mode and with the Legacy Interface.

Either option of Legacy Mode can be enabled by ticking the relevant box in Options Menu > Settings > Gameplay > Additional Options > Legacy Modes.

When Legacy Interface Mode is enabled, the RuneScape interface changes to an interface that looks similar to 2009.

Unlike in the modern interface mode, the ability to customise, move windows around and have multiple windows open is unavailable. 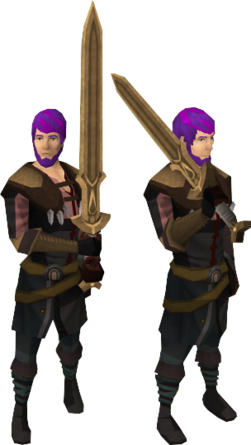 Legacy Combat Mode introduces a combat system similar to that which existed before the Evolution of Combat. This means that abilities are not available, the adrenaline system is disabled, action bars are not available, the 'ability damage' metric is not used, and wielding stances are modified. Legacy combat simply attacks with the weapon every few ticks (depending on the attack speed); equivalent to auto-attacks in modern combat. In addition to the combat changes, players see the old hitsplat graphics, and displayed life points on all entities are divided by 10. Many key bindings - everything related to action bars, as well as several related to combat like quick prayers, special attack, and familiar action - are disabled.

In modern combat, equipment bonuses have a hidden decimal place which can slightly alter damage potential (see here for more information) - this remains true for legacy, but as the values are divided by 10 the effect can be much more noticeable. The full number is used in damage calculation, not the truncated display seen on weapons and in the loadout interface.

Auto-attacks in Legacy combat (if they do not miss) can hit a maximum of 230% of the total damage of the weapon (including other equipment strength bonuses), and a minimum of 33% of the maximum hit (which is 75.9% of weapon damage). As they are auto-attacks, main- and off-hand weapons have their damage values separated. To compare this to other combat modes, it can be converted into an equivalent to average ability damage per tick (see Revolution for more on this):