From the RuneScape Wiki, the wiki for all things RuneScape
Jump to: navigation, search
The Old School RuneScape Wiki also has an article on: osrsw:Lectern
For the lectern on Anachronia, see Lectern (Anachronia). 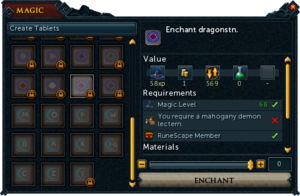 The animation for making Teleport Tablets.

A Lectern is a piece of furniture that members can build in the study of their player-owned houses.

With the use of a lectern, the players have the ability to craft magic tablets. Each level of lectern allows new spells to be crafted. To craft a spell tablet, players needs one soft clay for each tablet and the runes and Magic level required to cast the spell - though elemental staves (and the law/nature staves) can be used. Any magic tablet can be crafted regardless of the players current spellbook.

There is a difference between the eagle and demon lecterns, and they both gain more spells the higher level construction needed to build the lectern. Eagle lecterns are used to make teleportation spells (with the exception of the Lvl-1 Enchant spell), while demon lecterns are composed of enchantment spells, as well as bone alchemy (such as Bones to Bananas) with the exception of Varrock Teleport.

If the house owner logs out while a player is making teleport tablets, they will continue to make them outside of the portal.

The types of lecterns, materials required to build, and the experience earned are as follows:

Each 'tier' of lectern reduces the time needed to create tablets:

The tablets that can be made on each lectern are as follows:

This information has been compiled as part of the update history project. Some updates may not be included - see here for how to help out!
Retrieved from ‘https://runescape.wiki/w/Lectern?oldid=35481130’
Categories:
Hidden categories: