From the RuneScape Wiki, the wiki for all things RuneScape
Jump to: navigation, search
Leaflet? (edit)

The leaflet was a beginner guide with 5 pages about the workings of a bank for less experienced players and was released along with the Advisors and Objectives update. These were given out at the Grand Exchange and at all banks and stands. A player could not take another leaflet from the shelves if they already have one. However, banking the leaflet and then taking another as well as the drop trick allowed players to obtain multiple leaflets. Though this is untradeable, the trick renders it useless. It has since been discontinued, but still exists in-game. 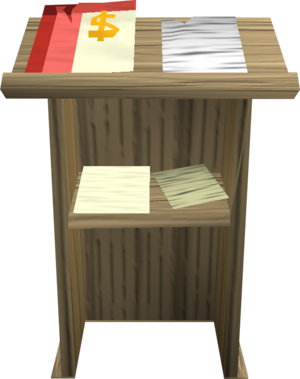 Leaflets at the Grand Exchange