From the RuneScape Wiki, the wiki for all things RuneScape
Jump to navigation Jump to search
For the Familiarisation NPC, see Lava titan (Familiarisation).

Lava titans are level 99 combat Summoning familiars. They are part of the titan group of familiars.

A lava titan has the following abilities:

Interacting with the familiar will give you an option either to chat or to teleport to level 40 wilderness. The teleport to the Lava Maze is very close to the Hobgoblin Mine with its abundance of necrite rock, not to mention the Lava Maze mine to the north with Phasmatite. It is also the fastest way to access the lever to the King Black Dragon's Lair for the 10% damage boost, as well as being the quickest way to the muddy chest.

The lava titan has a 20% chance to use its ebon thunder special attack instead of a standard attack.

They are also commonly used to boost Mining levels to make it easier to mine from Seren stones or in the Living Rock Caverns. Because Firemaking levels are given an invisible +10 boost, a lava titan familiar also decreases the likelihood of a hand cannon exploding.

Lava Titan scroll (Ebon Thunder) enables the use of the Ebon Thunder special move for a Lava titan. Using the pouch on a Summoning obelisk creates 10 scrolls.

Ebon Thunder is the special move for the lava titan, which deals up to 1300+ magic damage, and can drain an enemy's adrenaline by 10% if they have over 50% adrenaline. 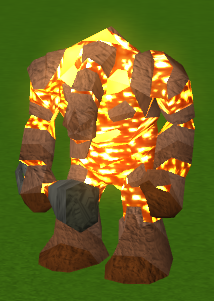