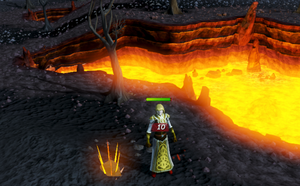 A lava splash damaging a player.

A lava splash is a phenomenon that occurs around lava lakes, such as those around the Chaos Temple, Clan Wars free-for-all arena, and the Wilderness North Volcano. The lava contain invisible non-player characters (similar to fishing spots) that periodically throw up lava projectiles. These "splashes" fly upwards into the air and then land on a random map square nearby. Upon landing they explode and then fade away. If a player is standing within a couple of squares of the landing site, the damage sound effect will be heard, and the player will receive a random amount of damage, ranging from 10 to over 50.

It is as of yet unproven whether NPCs are immune to lava splashes or not. The only NPC within the reach of lava splashes is Simon near the Chaos Temple, who, as a non-attackable character, is already immune to all forms of damage.