From the RuneScape Wiki, the wiki for all things RuneScape
Jump to navigation Jump to search
This article is about the activity monster. For other meanings, see Lava monster.

The Lava monster is encountered during the Lava Flow Mine activity. It appears along with the TzHaar hero, who chases it. If it is caught by the TzHaar hero, everyone in the mine will have double the chance of receiving gems for the next ten minutes. In order for the hero to reach it, players must taunt the monster repeatedly, causing it to pause temporarily each time and allowing the hero the opportunity to catch up to it. 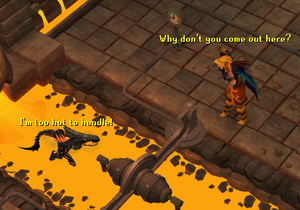 Taunting a lava monster, also showing the size of it.

Taunting the lava monster will result in calling one of the following phrases:

And the lava monster will say one of the following phrases back: 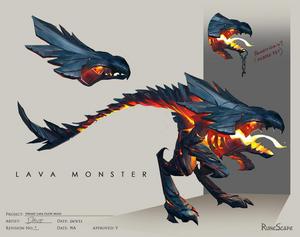