From the RuneScape Wiki, the wiki for all things RuneScape
Jump to: navigation, search
The Old School RuneScape Wiki also has an article on: osrsw:Lathas' amuletThe RuneScape Classic Wiki also has an article on: classicrsw:King lathas Amulet
Item JSON: {"edible":"no","disassembly":"n/a","stackable":"no","stacksinbank":"yes","death":"always","name":"Lathas' amulet","bankable":"yes","gemw":false,"equipable":"yes","members":"yes","id":"421","release_date":"23 October 2002","restriction":"removed","release_update_post":"Updates galore!","lendable":"no","destroy":"Drop","highalch":4,"weight":0.01,"tradeable":"no","examine":"Yup. It's an amulet.","noteable":"no"} 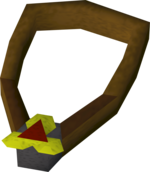 Lathas' amulet is a now-discontinued quest item from the Plague City quest series. It was given out as part of the reward for the Biohazard quest in RuneScape Classic. Players were given the amulet by Lathas so that he could inform them upon the discovery of a way into the forests of Isafdar; similar to how Lathas' Messenger appears for Regicide. The amulet's gem was green until the release of Underground Pass, when it changed red. To begin the quest, player needed to visit King Lathas.

The amulet gave no bonuses nor penalties, nor had any weight associated to it. Its sole purpose was to let the player know whenever Underground Pass was released.