From the RuneScape Wiki, the wiki for all things RuneScape
Jump to: navigation, search
Item JSON: {"edible":"no","disassembly":"no","stackable":"no","stacksinbank":"no","death":"always","name":"Large space dust","bankable":"no","gemw":false,"equipable":"no","members":"no","id":"32535","release_date":"3 November 2014","restriction":"microtransaction","release_update_post":"Patch Week","lendable":"no","destroy":"Are you sure you want to destroy this space dust? You cannot reclaim it.","highalch":false,"weight":0.453,"lowalch":false,"tradeable":"no","examine":"This space dust can be used to give bonus XP in a skill of your choice, granting more if you choose one of your lowest skills.","noteable":"no"}

Large space dust is a promotional item on Treasure Hunter as part of the Meteor Storm promotion added on 21 January 2016. When used, it will give 33% more bonus experience in a chosen skill than a large fallen star, or 100% more if the skill is one of your five lowest levelled skills. When you have multiple space dust in your inventory, you are given a selection on which one(s) to use. If the player's Dungeoneering, Invention, and/or Slayer level is less than 120 those will count as lower than any level 99 skill. 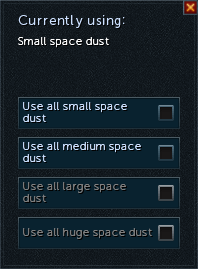 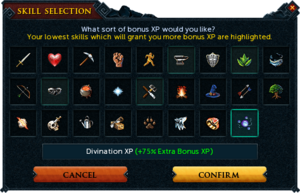