From the RuneScape Wiki, the wiki for all things RuneScape
Jump to: navigation, search
Large gnomeball? (edit)

The large gnomeball was a rare reward available on Treasure Hunter from 13 June to 16 June 2014. Since 23 July 2018, it is available for free from Diango.

As it is kicked around by players, it gains new forms that it can be changed into. Each form, apart from the basic one, has an emote associated with it. Players have a chance of failing to kick the ball when it is in free mode. If you fail to kick the ball, a message will show in the chatbox: "You fail to kick the ball anywhere." When the ball in is rolling mode, it will bounce off walls and players. The ball can be easily retrieved at any time by right-clicking it in the inventory, eliminating the risk of losing it. Other players' simultaneous kicks also count towards the kick count, which can drastically reduce the time required to level it up.

One method of quickly increasing the kick count is to place the ball inside a pillory cage in Yanille or Varrock, and kick the ball repeatedly. Multiple players can simultaneously kick the ball without the need to retrieve the ball or run anywhere.

Upon leveling up, you get the message: You have unlocked the <ball>! 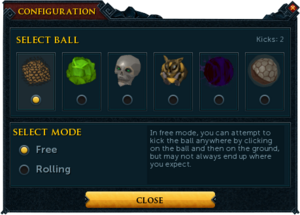