From the RuneScape Wiki, the wiki for all things RuneScape
(Redirected from Large experience lamp)
Jump to: navigation, search
For other large XP lamps, see Large lamp.
Item JSON: {"edible":"no","disassembly":"no","stackable":"no","stacksinbank":"yes","death":"alwaysinclwild","name":"Large XP lamp","bankable":"no","gemw":false,"equipable":"no","members":"no","id":"23715","release_date":"28 February 2012","release_update_post":"Spin and Win on the Squeal of Fortune!","lendable":"no","destroy":"Are you sure you want to destroy this lamp? You cannot reclaim it.","highalch":false,"weight":0.1,"lowalch":false,"tradeable":"no","examine":"This lamp seems quite powerful.","noteable":"no"}

A skill-specific large XP lamp is a rare prize reward from Treasure Hunter, which grants the player a definite amount of experience scaled to the selected skill level. The experience gained is the same from level 98 to 120. Lamps can be gained for any skill that has not been frozen.

In addition to coming in a skill-specific form, where the skill was specified by the lamp, players could also receive lamps where they could choose the skill they would gain experience in. These were replaced on the Squeal of Fortune with large prismatic lamps.

As of 11 December 2012, this lamp can also be obtained from Meg in the Player-owned port minigame.

During the 2014 Hallowe'en event, large XP lamps could be bought for 5,000 reward points or 3 trophies. Following the release of the quest Broken Home, after completing this quest once, the reward costs dropped by 15% to 4250 reward points.

If you use a large XP lamp on Dungeoneering, dungeoneering tokens will not be awarded. 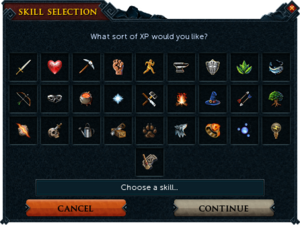 The reward interface of a Large XP lamp. 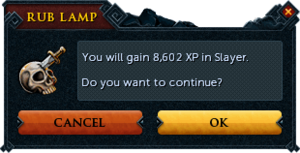 The following is an experience table detailing the number of experience received from a large lamp for any given skill level:

The update history project is a work-in-progress – not all updates to this topic may be covered below. See here for how to help out!
Retrieved from ‘https://runescape.wiki/w/Large_XP_lamp?oldid=35280117’
Categories:
Hidden categories: