From the RuneScape Wiki, the wiki for all things RuneScape
Jump to navigation Jump to search
Large energy wispLarge energy spring? (edit)

A large energy wisp is a wisp encountered during the world event The Bird and the Beast. The wisps are found from the Anima Mundi that were created as a result of Guthix's death. Players will be given a notification stating that the "wisps discovered here are unusually large, increasing gathering rate".

The divine energy collected by each faction will then be used in their ultimate weapons, the Scarecrow and the Divine Focus, by the two opposing gods, Bandos and Armadyl. 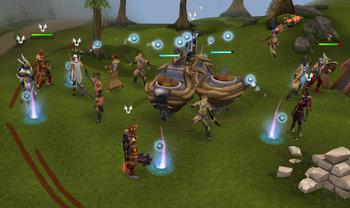 This information has been compiled as part of the update history project. Some updates may not be included - see here for how to help out!
Retrieved from ‘https://runescape.wiki/w/Large_energy_wisp?oldid=35643036’
Categories:
Hidden categories: