From the RuneScape Wiki, the wiki for all things RuneScape
Jump to navigation Jump to search
Item JSON: {"edible":"no","disassembly":"no","stackable":"yes","stacksinbank":"yes","death":"always","name":"Large dwarven toolbox","bankable":"yes","gemw":false,"equipable":"no","members":"no","id":"34527","release_date":"17 April 2015","restriction":"microtransaction","release_update_post":"Treasure Hunter – Dwarven Tools","lendable":"no","destroy":"Are you sure you want to destroy your Treasure Hunter prize? You cannot reclaim it.","highalch":false,"weight":0,"lowalch":false,"tradeable":"no","examine":"A box of parts that will allow you to create 2 prototype dwarven tools.","noteable":"no"}

The tools work with divine locations, but only getting double resources stacks with the x2 loot bonus from Guthixian Caches.

It can be obtained through Vic's Store for 50 credits. 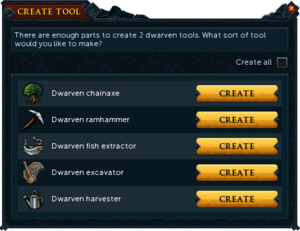 The interface for the dwarven toolbox

This information has been compiled as part of the update history project. Some updates may not be included - see here for how to help out!
Retrieved from ‘https://runescape.wiki/w/Large_dwarven_toolbox?oldid=35689411’
Categories:
Hidden categories: