Lair of Tarn Razorlor is a miniquest in which the player's objective is to kill Tarn Razorlor and retrieve his diary, allowing them to enchant the Salve Amulet.

Getting to Tarn Razorlor[edit | edit source] 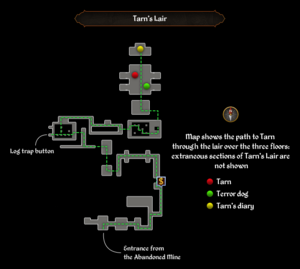 A map of Tarn's Lair, with the route highlighted in green

The ring of slaying can teleport you directly to Tarn's lair, if you've unlocked it.

The entrance to Tarn's Lair is at the northern end of level 1 of the Abandoned Mine.

For a guide to the correct path through the dungeon, see Tarn's Lair#Route. 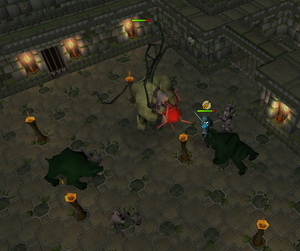 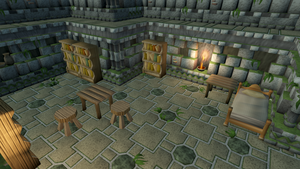 Tarn's bedroom, with his diary on a table

Upon entering the room with Tarn, a cutscene of Tarn transforming into a green mutant with lashing tentacles and unleashing two level 65 terror dogs plays. After this cutscene, the fight will begin. Animated steel armour will also attack if the player moves near them.

Tarn can attack with both melee and magic but attacks solely with melee if approached. Since the terror dogs can only use melee, Protect from Melee or Deflect Melee is strongly recommended, but Prayer is drained constantly, so bringing Prayer potions is recommended. Tarn is weak to Air spells in his first form.

After his first form is defeated, he will turn into a ghost and is now weak to thrown weapons. Tarn Razorlor is the only monster required to be killed, so ignoring the minions and turning off Auto Retaliate is recommended.

As soon as Tarn is defeated, a room will open up. Tarn's diary is in this next room on a table. Picking it up completes the miniquest.

Lair of Tarn Razorlor is not currently required for any quests or miniquests.