From the RuneScape Wiki, the wiki for all things RuneScape
Jump to: navigation, search
Wikipedia also has an article on: wikipedia:Lag 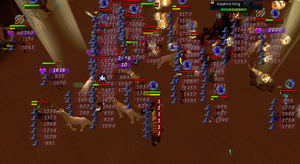 A typical example of lag

Lag is the delay of data transmission between two digital devices. While considered a glitch by many, lag is not exactly the same. It typically has to do with the server space and a player's own computer. The amount of lag depends on several factors, such as server load, internet connection, and computer specifications.

Lag always exists, from undetectable to complete connection loss which is unreliable. Lag is not fixable by Jagex. Lag is a very common cause of death, so one should not partake in dangerous activities while suffering from lag, like playing Barrows, player killing, boss hunting or fighting any powerful monsters.

If in case you're in a high-risk situation (not including PvP) the game happens to disconnect, always equip your ring of death to prevent any loss (especially high-level gear, multiple weapon switches, etc.) the next time you try to log back. 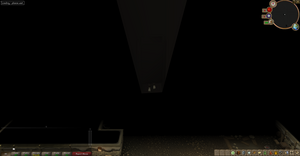 A player with computer lag during Unstable Foundations

Computer lag is the most common type of lag, often caused by insufficient RAM (Random Access Memory), CPU (Central Processing Unit) power or GPU (Graphics Processing Unit) power. You know you have this type of lag when the game redraws at a very slow rate, causing the animation to be bumpy. Computer lag is more common when a lot of people are standing in an area, forcing the computer to spend more time redrawing.

Windows users may determine what aspect of your hardware is causing the problem (be it CPU, RAM or GPU) by opening the task manager on Windows and switching to the Performance tab. If you are running a single-core CPU, or if your CPU usage is frequently approaching 100%, your CPU may be at fault; if your Physical Memory usage is often above 80%, you should consider upgrading your RAM (the operating system uses this memory sparingly if it is insufficient, and therefore it is rare that more than 90% will be used at a time); if neither of these hardware aspects appear to be problematic, it is likely that your graphics card is at fault.

If using macOS, quit unnecessary applications and check Activity Monitor for processes using large amounts of memory and CPU load. Furthermore, some of the most pertinent issues surrounding Runescape on Mac would pertain to use of Safari, especially more recent versions with multiple browser windows open. Mac users would greatly benefit from switching to Firefox or Chrome (which will also earn the player a set of Chrome goggles), or even just playing with the Game Client.

Internet lag is another very common type of lag. It is caused by your internet connection, your Internet Service Provider or bandwidth limitations in the connection to the Runescape server in question. Information is sent from RuneScape to your computer in packages; if these packages become "lost" or corrupted on the way, it may take the RuneScape server a while to realise this and then attempt to correct the error. This form of lag is usually neither your fault nor Jagex's fault and is typically unavoidable.

If an exception is thrown when attempting client-server communication, the "Connection lost. Please wait - attempting to reestablish..." message appears in the top-left corner. Then the client attempts to reconnect to the server, which may fail. This may happen if the connection suddenly ends, such as by unplugging the Ethernet cable.

Otherwise, no network error is detected and the client continues to attempt communication with the server until time-out. Everything on the screen will freeze, while it is still possible to manipulate already-existing data such as rotating the camera, scrolling through the chat box, or right-clicking items or objects. If connection is not achieved by a certain time limit (five to twenty seconds), the game will automatically log out.

In extreme cases, if the amount of data allowed between client and server is very limited, data from the server to client is sent first. This includes movement of NPCs and other players, damage, etc. In this case, the player experiencing lag will be unable to move, talk, eat, or provide any input to the server. If the player is in combat at this time, they will not be able to retaliate, even if Auto-retaliate is on. The time-out is irrelevant in this instance, and the player will automatically log out in five minutes (more if in combat). It is not uncommon to watch your character slowly getting killed while unable to retaliate, eat food, run, teleport, or log out.

If your character has just died and has lost items (therefore getting a gravestone), the countdown timer to the gravestone collapsing still runs during lag (for example, if the timer is at 3 minutes, and your character cannot move due to lag, after 10 seconds when you recover you may find that the timer has now reached 2:50). The game treats it as if there is no lag and you are just standing still. This also applies when a server update is due. The countdown will continue regardless of your lag.

Lag at the server is common. This happens when the server itself cannot handle the simultaneous requests of all its clients and processes. This is the only lag that is caused by Jagex. It cannot be easily reproduced, and attempting to create this type of lag is reportable under Bug abuse.

What to do when lagging[edit | edit source]