From the RuneScape Wiki, the wiki for all things RuneScape
Jump to: navigation, search
The Old School RuneScape Wiki also has an article on: osrsw:Kurask head (mounted)
This article is about the kurask head mounted in a player's house. For other uses, see Kurask head (disambiguation).
Required materials: 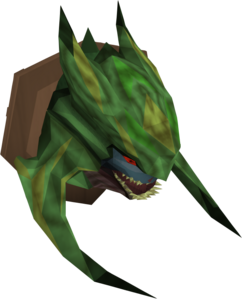 A mounted kurask head can be built in the head trophy hotspot of the Skill Hall in a player-owned house. Upon building it, players will receive 357 Construction experience and 657 Slayer experience.

The only way to get a Kurask head is by killing Kurasks, which requires 70 Slayer. Players must then take the head to the Taxidermist in Canifis, who will stuff it for 6,000 coins. Once mounted, the head cannot be reclaimed. If players remove the mounted head, they will receive nothing back. Jagex has stated that this is because mounting the head rewards Slayer experience, and they did not want players to be able to train slayer by removing and remounting the kurask head.