From the RuneScape Wiki, the wiki for all things RuneScape
< Kree'arra
Jump to: navigation, search
The Old School RuneScape Wiki also has an article on: osrsw:Kree'arra/Strategies

Kree'arra is the Armadyl general in the God Wars Dungeon. He is extremely deadly against unprotected players. He has moderate range and mage defence, and players can kill it according to their recommended style (melee will not work against Kree'arra). Kree'arra and his bodyguards can drop the famed Armadyl armour (Armadyl helmet, chestplate, chainskirt, boots, buckler, gloves). Kree'arra can also drop the Armadyl hilt, which is used to create the Armadyl godsword.

Like the other generals, Kree'arra has an instanced option costing the player 200,000 coins for each hour.

Prior to fighting Kree'arra, it is recommended that players who have completed Ritual of the Mahjarrat quest visit the Glacor Cave to receive a 5% damage boost from the effect of the Stone of Jas. This can be done via the Fairy ring code DKQ.

The mage and range attacks are single-hitting, however, Kree'arra's attacks are varied. When there is more than one person in the room, Kree'arra will launch multiple attacks at once, and each attack can be the same style or different.

The player has the option to choose between the normal room and an instanced room; both strategies are applied here. If a player uses an instanced room, it will cost them 200,000 coins per hour, but if the player dies they can recover their items without being barraged by attacks.

Since many of the items dropped have a good high alchemy value, it is possible to bring a Steel titan or Iron titan and spam scrolls rather than bringing a Beast of burden.

Kree'arra's attacks have a chance of knocking the player around his room, except for his melee attacks. They can interrupt channelled abilities, so if a player is using Rapid Fire and is knocked around, the ability will end immediately, wasting it. To counter it, players should hug the wall corners (or the tile in front of the big door), which will prevent the player from being knocked around.

If the player has not yet unlocked the ability Death's Swiftness, they should use the following:

Once Kree'arra is dead, kill the minions in this order: Wingman Skree, Flockleader Geerin, and finally Flight Kilisa. Skree has the highest damage output when the player is protecting against the right styles from Kree'arra, as his attacks easily hit up to 600+ very frequently. The use of Debilitate also works during the fight, as it will cut damage from him for a short time.

Since the kill will typically start with an ultimate ability such as Death's Swiftness or Sunshine, a ring of vigour is very helpful to bring as a ring switch for additional adrenaline.

After all the minions are dead, take your time to heal and restore your prayer if needed. Adrenaline stalling can also help increase kill rates. An enhanced excalibur will offer the same healing as a healing ultimate ability without needing any adrenaline. 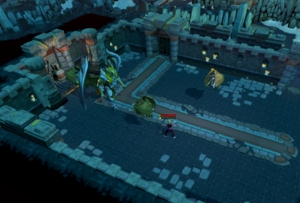 This instanced room presumes that the player is fighting Kree'arra on the fastest spawn rate.

In this room, the player should have at least level 80+ armour and 90+ weaponry, as the boss will usually spawn before you are able to kill all three bodyguards. In this instance, the fight goes on as the normal room. Upon Kree'arra's death, immediately target Skree and then kill another bodyguard of your choice. It is not recommended to kill all three unless you need to, as killing them will just respawn them as soon as he spawns.

Adrenaline stalling is usually not needed here, but if it is, only use one ability, since the boss will spawn very quickly. Due to the fast kill rates the player should be getting, bringing along a bonecrusher and a split dragontooth necklace or demon horn necklace as their means of restoring prayer along would be a good choice. It is recommended to use this strategy along with a large amount of prayer flasks, as it is very unlikely to maintain your prayer points just from Kree'arra and his guards alone.

While level 90 armours are indeed the most effective, when the cost and profit per hour is taken into consideration, it is more efficient to use less costly armours.