From the RuneScape Wiki, the wiki for all things RuneScape
Jump to navigation Jump to search
This article is about the miniquest. For the achievements, see Koschei's Troubles (achievement) and Koschei's Cache.

Koschei's Troubles is a short miniquest revolving around the mind-wiping and history of Fremennik champion Koschei the deathless. He was found years ago by the Fremennik, washed ashore without memory of his identity, after which he was made a Fremennik warrior. The miniquest, unlike many others, was not released as a hidden update.

You can start by talking to Thorvald the Warrior in Rellekka, found inside Skulgrimen's Battle Gear, just north of the longhall. He will say that something is wrong with Koschei and he needs your help, and to go down the ladder to where you fought Koschei during The Fremennik Trials. Climb down the nearby ladder to find Koschei standing in his arena.

The Axe and the Tree[edit | edit source] 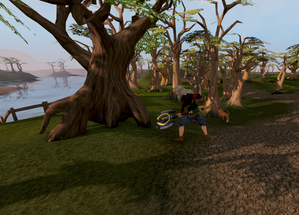 Koschei will ask you to go south of Rellekka to chop down a strange blossoming tree that he has seen. The tree seems to be calling out to Koschei, and he says that even his sharpest axes will not harm it. To chop down the blossoming tree, you will need the Balmung from the Blood Runs Deep quest, which you can retrieve by talking to Queen Sigrid if you don't already have it.

The tree is found just north-west of the bridge, by the path south of Rellekka. Chopping down the tree will reveal a Strange chest in the stump. Pick up the chest. It is locked and appears to have no keyhole or other way to open it.

Return to Koschei the Deathless, he will immediately know that you have found a chest, before you have a chance to tell him about it. He says that this is because he feels some connection with the chest. He will unlock the chest, revealing a toy ship inside.

On examining the ship, you will notice some writing on the back of the sail reads "Koschei, hopefully this will reach you at the right time. You will know in your bones if it is". Koschei will remark that he knows that he was obviously meant to find the ship at that time, as that is why the blossoming tree had suddenly started to bother him.

Seeing the ship unlocks some lost memories for Koschei. He recalls being on a similar ship, when he was found at sea. He also recalls pain. Koschei cannot initially remember any more, but remarks that when he looks at the ship he sees it on water. He asks the player to float the ship on some water from the well in Rellekka.

Go to the well south-east of the longhall. Use the ship on the well to float it on a bucket of water. When this happens, a panel opens on the toy ship's deck, revealing a small, white jewel. Alternatively, you may use the ship on the Rellekka well when it contains the polar bear for additional dialogue. 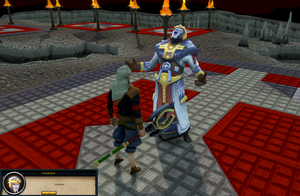 Return to Koschei and show him the jewel. It will trigger a memory of what happened on the ship when he was lost at sea. He will reveal that he was attacked by an assassin, who branded him on his chest with a symbol of Zamorak. The ensuing battle tore the ship apart.

Koschei will be able to recall no more, but will note that the jewel is the key to unlocking his mind and revealing his past. He will ask you to modify the jewel in order to help unlock more memories. Your options include:

Whatever choice you make, when you give the jewel back to Koschei he will remember his true identity and will turn into the Mahjarrat, Kharshai.

In a cutscene, Kharshai will warn the player that guests are soon to arrive, and that it is best to stay quiet. Soon after, Enakhra and Akthanakos will arrive supposedly to check if it was truly him, as they have sensed his presence once more. However, Kharshai is aware that they have both come to gain his support in the clash of Zamorakian and Zarosian Mahjarrat respectively. Kharshai will maintain his neutrality, refusing to support either side. Enakhra and Akthanakos both depart, warning Kharshai that he will not have their support in future. Kharshai maintains to you that he wishes to maintain peace between the Mahjarrat, so will not support either faction.

As a reward for your help, Kharshai will then upgrade the Balmung for you and the Fremennik as a token of gratitude. You have completed the miniquest.

You can change the colour of the jewel, and the Balmung, at any time by speaking to Kharshai.

You may speak to Kharshai after receiving the rewards to show him each of the coloured jewels and unlock additional memories. To do this, if you are eligible to start the miniquest Mahjarrat Memories, he will first ask for the player to have at least a level of 60 in Divination, mentioning that he has been experimenting with the methods of channeling used in divination. Once these are unlocked, the player can go through all the options at any time.

Speak to Kharshai with the blue jewel to unlock this memory. It is revealed that Kharshai himself was the one that actually erased his memories. According to him, he did that to conceal himself from the other Mahjarrat and that simply shapeshifting wouldn't protect him from the Mahjarrat's innate ability to sense one another.

Speak to Kharshai with the red jewel to unlock this memory. It is revealed that he is the creator of the Balmung, which he says is made of bane ore and that he was working on a spell to enhance it, heading to the Fremennik Isles to obtain Dagannoth blood when his memory was gone. He adds that the player later added the Dagannoth blood, thus tuning the weapon to dagannoth.

Speak to Kharshai with the green jewel to unlock this memory. He reveals that he knows why he is still powerful after so many centuries in the form of Koschei, despite the fact that Mahjarrat generally lose their power over time, even when disguised. According to him, sealing his memory was the key to preserving the power he possessed, since he didn't know the power he had, he didn't use it. He also mentions that this information will interest all the Mahjarrat and he suspects they are already working on a way to locate anyone else that may try to use this method in the future.

Completion doesn't require unlocking the additional memories. However unlocking all memories is a requirement for the master quest cape.