Korasi's sword (The Void Stares Back)

From the RuneScape Wiki, the wiki for all things RuneScape
Jump to: navigation, search
For other uses, see Korasi's sword (disambiguation).
Korasi's sword? (edit)

The Void Stares Back requires 80 Magic and 78 Attack and Strength as well as other skill requirements, which effectively act as minimum requirements to wield the sword.

If lost during The Void Stares Back, it can be re-obtained by speaking to either Korasi or Jessika, depending on who is saved during the quest.

Korasi's sword has a special attack called Disrupt, which consumes 10% adrenaline during the battle with the Pest Queen. It deals up to 300% weapon damage as magic damage, which also hits any foe adjacent to the player. The special attack makes the sword very powerful, as it can hit with very close to the same power as Ultimate abilities like Overpower without requiring a full adrenaline bar.

Use of this special attack converts some of the experience from the death of the target into Magic-style experience, as determined by the combat settings of the player: Magic, Defence, or Magic and Defence. Therefore a player can expect slightly less then normal experience going towards a melee combative skill they are training unless they've chosen to only receive Defence experience from magical combat. 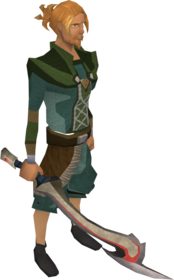