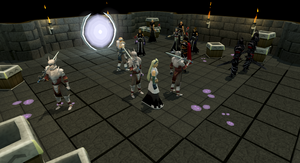 The knights, ready to take on the worst.

The Knight Order Alliance of 169 is formed during the quest The Void Stares Back. The founding of it was a very controversial decision. Four orders of knights agree to temporarily work together in order to bring down the evil Wizard Grayzag, who had betrayed and/or attacked all of the orders.

After Grayzag and the pests have been defeated, the player can choose whether he should be executed by the Void Knights, tortured by the Kinshra, interrogated by the Temple Knights or simply imprisoned in the White Knights' Castle by the order of the same name. With this decision, the chosen order takes its prisoner and the alliance ends.