From the RuneScape Wiki, the wiki for all things RuneScape
Jump to navigation Jump to search
The Old School RuneScape Wiki also has an article on: osrsw:King Raddallin

King Raddallin was the founder and first king of Asgarnia, a human nation that was founded late in the Fourth Age.

Raddallin, from the Donblas tribe, was originally king of the handful of villages scattered around the western region which is now the kingdom of Asgarnia. During this period, many tribes were pledging allegiance to Misthalin for safety and sanctuary, but the tribes of the west refused out of independence.

King Raddallin sought then to join the kingdom of Misthalin under the advice of the White Knights, whom acted as guardians of the western realms, as the tribes had no wizards of their own to remove their vulnerability to other races. However, with advice from the newly-arrived Varrockian nobleman Lord Valzin, Raddallin was convinced to instead expand his fledging kingdom and unify the tribes of the lands west of the Lum under his rule.

As Raddallin's kingdom would eventually grow and expand its borders, Valzin persuaded him to allow the creation of new a knightly order, but to dispel the notions of favouritism, encouraged Raddallin to swear fealty to Zamorak, leading to the formation of the Kinshra. The white knights and the Kinshra would become bitter rivals, due to religious differences and the perceived self-entitlement of the white knights against their counterparts. 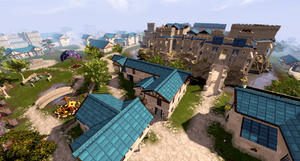 A subsequent bloody conflict between the human tribes and the non-human races, which saw the creation of a second knightly order as a act of aggression, would eventually be won by the humans in part due to the co-operation between both knightly orders and lead to the establishment of Asgarnia, which would become the sole power of the region with Raddallin as its king.

Falador, once a small village, became the capital city of the newly established kingdom during the early years of the Fifth Age. Valzin eventually became influential and dominated the court of Raddallin, recommending men into high positions.

The long held bitter rivalry present within the two orders led Raddallin to resign his fate as a constant mediator of conflict between the two sides as he wished to disband neither of the orders out of gratitude.

The burning of the Wizards' Tower, blamed on Zamorakians during the seventieth year of the Fifth Age, resulted in the expulsion of Zamorakians, including Valzin, in the court and Falador proper when pressure was put on the now elderly Raddallin on the looming threat of a civil war.

After Valzin's retreat to Ice Mountain, Raddallin secretly funded the project to fortify his mansion, which was located there. Valzin's death would result in the Kinshra renouncing their recognition of the legitimacy of Raddallin's crown. Out of respect to his old friend, he ignored their treasonous words. At an unknown time after, Raddallin passed away.

The succession of kings after Raddallin's death, which eventually fell to King Vallance, allowed the rivalry and unrest to grow between the two factions. When Vallence grew old and fell ill, central authority weakened and the rivalry took a turn for the worst when Sir Amik Varze, the leader of the White Knights in year 162 of the Fifth Age, took advantage of the ill king and declared that the Kinshra were to have no power in Asgarnia.

The subsequent cold-war that followed lasted only a year until the Black Knights launched an invasion, climaxing at the Siege of Falador in year 164. The invasion was a failure and Falador was victorious, but conflicts with the Black Knights continued for many years, and do so to this day. A notable conflict took part in the beginning of the Sixth Age, known as the Invasion of Falador. The lost sword of King Raddallin was unearthed in the Falador garden in the midst of the fighting. The White Knights ultimately emerged victorious, but suffered heavy casualties.

Transcripts King Raddallin is the author or co-author of: