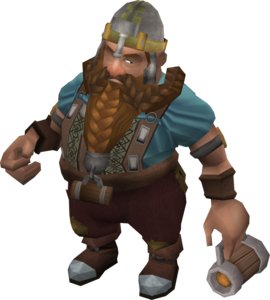 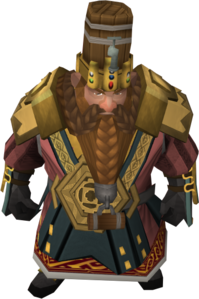 The Drunken Dwarf is an intoxicated dwarf who wanders Gielinor giving kebabs and beer to adventurers who talk to him, and then proceeds to teleport away to other places. He is a former RuneScape Random Event, and has a number of quest and miniquest appearances.

The Drunken Dwarf is seen in the final cutscene of the Forgettable Tale of a Drunken Dwarf quest. After the quest, if you see the dwarf and talk to him, he will speak of your "kebab stories" from the end of the quest and give you your beer and kebab as normal. 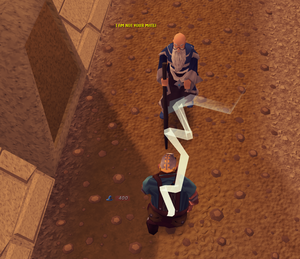 The Drunken Dwarf, getting killed by the Wise Old Man during Swan Song.

The Drunken Dwarf, dead again in My Arm's Big Adventure.

During the My Arm's Big Adventure quest, the Drunken Dwarf will wander too close to the goutweed that My Arm is attempting to grow and will be thrown off a mountain. A nameless newborn troll then attempts to eat his leg, earning the name Drunken Dwarf's Leg.

When Hreidmar, the rightful heir to the Keldagrim throne, is killed by the adventurer in the assault on the Red Axe stronghold, Veldaban is corrupted by his spell, and begins to turn into a Chaos dwarf. If the adventurer kills Veldaban, they can then tell the Consortium to yield their power the true heir to the dwarven throne; Meike discovers that the Drunken Dwarf is the heir to the throne. He is originally crowned as 'King <his name>', but during the post-coronation party he becomes too inebriated to even remember his own name; at his own request, he is thus crowned as 'King Drunken Dwarf'.

After the quest, if he becomes king, he can then be found at the top of Keldagrim Palace. If he is not made king, he can be found in his house in Northeast Keldagrim with the broken glass on the floor.

The Drunken Dwarf is a participant in the Court Cases Distraction and Diversion, in the case of the Drunken Dwarf versus Botros. In the case he is alleged to have assaulted the character Botros whilst skilling; it is up to the player to decide whether to prosecute on behalf of Botros or defend the drunken dwarf. For completing the case the player will be rewarded with 5000 attack experience for prosecuting or 5,000 defence experience for defending the drunken dwarf.

Present 28 different ales/beers to him for the achievement Open Bar.

As a random event, he would occasionally appear and talk to players. If the player responded, the dwarf would give them a kebab and a beer. If the player ignored him, he would throw rocks at the player which hit a max of 2 hitpoints, (the equivalent of about 200 life points) capable of hitting through even the Protect from Missiles prayer. He would not stop unless the player talked to him.

He could be killed using a combative familiar (if you were in multicombat), and upon death would just drop regular bones.

It was widely disputed that this random event was unfair, because if the player lagged, they would most likely have died as a result.

If the player died or logged out, the Dwarf would exclaim:

The dwarf could be found at the Hunter event station during the Summer Skill Off, with Gunther claiming he hasn't left him alone since Novtumberfest.

The Drunken dwarf greets the player.

A short while after he has given the player a Beer and Kebab (except for Battle of Lumbridge where he gives Beer, Kebab and 5 Divine Tears), he will teleport away. 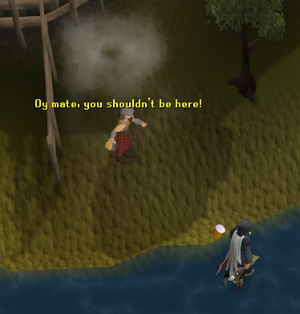 The Drunken Dwarf "evicts" a player that has glitched their way onto Tutorial Island.
Retrieved from ‘https://runescape.wiki/w/Drunken_Dwarf?oldid=35730043’
Categories:
Hidden categories: