From the RuneScape Wiki, the wiki for all things RuneScape
(Redirected from King Awowogei)
Jump to navigation Jump to search
The Old School RuneScape Wiki also has an article on: osrsw:Awowogei

King Awowogei is the powerful monkey king and monarch of Ape Atoll. He is also part of the Secret Council of Gielinor, despite the fact that no one can understand him. He needs to be rescued from the powerful Culinaromancer during the events of the Recipe for Disaster quest by being fed stuffed snake.

His palace is located south of the Temple of Marimbo which is in east of Marim, the monkey capital. King Awowogei has Elder Guards blocking the entrances to get inside the building he resides in, however the player can get inside by talking to the Elder Guard directly south of Awowogei in monkey form. Awowogei also plays a role in Monkey Madness, forging an alliance with the Karamjan monkeys and the monkeys of Ape Atoll. The player needs a monkeyspeak amulet to talk to him. Awowogei somehow appears to possess knowledge of the existence of ScapeRune, as shown in a Postbag from the Hedge.

Awowogei also plays a role in Do No Evil, where the player proposes to construct a settlement in the desert. Awowogei initially disapproves of the idea until the player mentions choc-ice, which gets his attention. The player later brings him a choc-ice, which he enjoys with much delight, and approves of constructing a settlement there. It is also mentioned during the quest that he likes squirrel meat.

As with most monkeys, he is a devoted follower of the monkey god, Marimbo. 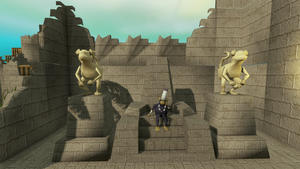 The king sitting on his throne 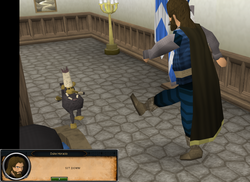 Awowogei being kicked by Duke Horacio at the Secret Council of Gielinor meeting
Retrieved from ‘https://runescape.wiki/w/Awowogei?oldid=35697300’
Categories:
Hidden categories: