From the RuneScape Wiki, the wiki for all things RuneScape
Jump to: navigation, search
Item JSON: {"edible":"no","disassembly":"no","stackable":"no","stacksinbank":"yes","death":"always","name":"Kinetic cyclone","bankable":"yes","gemw":false,"equipable":"no","members":"yes","id":"37400","release_date":"16 May 2016","release_update_post":"Invention Tech Trees Update - New Devices - Griffon Outfit","lendable":"no","destroy":"You must manufacture another one at an Invention workbench.","highalch":false,"weight":30,"lowalch":false,"tradeable":"no","examine":"An inventive variation of the multicannon for meleeing enemies. Requires cannonballs.","noteable":"no"}
Kinetic cyclone? (edit) 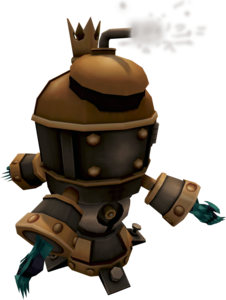 The kinetic cyclone is an Invention device that is a part of the Dwarven technology tree. It requires 55 Dwarven Currency and level 70 Invention to unlock. It is the melee variant of the dwarf multicannon. The kinetic cyclone takes up a 3x3 area of space when deployed, and it can attack all targets within a 5x5 area, dealing damage every 3 ticks. The experience gained from using the kinetic cyclone is dependent upon the player's Melee XP selection in their Combat Settings.[1]

The kinetic cyclone requires cannonballs as fuel, consuming one every time it attacks (even if it hits multiple targets), and it has a cannonball capacity of 30. When active, any enemy that is in range will be repeatedly attacked by the spinning claws, and it can hit all enemies at once. It benefits from the same perks as the dwarf multicannon if unlocked, increasing the cannonball capacity to 60 or 90 and allowing it to restock automatically if the player is in range.

If destroyed, it will need to be rebuilt. If lost, you will receive a message stating it was destroyed but that you can reclaim it from Nulodion, located near the entrance to the Dwarven Mine south of Ice Mountain. However, it can be used indefinitely if you keep picking it up and re-deploying it when you receive the decay warning.

It can be upgraded with a Kinetic cyclone upgrade kit which increases its damage by 50% at a cost of 2,767,842.