Khazard's Army is a group of armed forces consisting of Humans that fight for the Zamorakian Mahjarrat known as General Khazard. They are situated in the area around Port Khazard, the Fight Arena and the Battlefield.

The army is extremely loyal to their Mahjarrat leader, and, like the General himself, are quite fond of his pet Hellhound Bouncer. They seem to have a particular hatred of gnomes, showing no mercy to them, and during the Tree Gnome Village quest, a group of them attack the Tree Gnome Village, slaughtering many unarmed gnomes inside, including women and children.

While General Khazard himself is Zamorakian, it is unknown whether the rest of the army is Zamorakian, although their loyalty to him would suggest that they are.

The war with the gnomes[edit | edit source]

The forces of Khazard are currently at war with the Gnomes of the Tree Gnome Village. During one of their most recent battles in the Battlefield north of the Village, one of the troops stole an Orb of protection and hid it in a stronghold north of the Battlefield, so that the gnomes would surrender to them. This led the Village's gnome king, King Bolren, to ask for help to a human adventurer who just recently had managed to trespass the Village maze in his curiosity, starting the events of the Tree Gnome Village quest. After the adventurer successfully infiltrates the stronghold (using a gnome ballista) and recovers the orb, they return to King Bolren only to find that, while he was recovering the orb, another Khazard troop, leaded by a Khazard Warlord, attacked the Village and stole the remaining two Orbs of protection, killing some gnomes in the way. Again, the adventurer searches for the orbs, until they find the warlord hidden outside the walls of West Ardougne and defeats him, recovering the orbs and saving the tree gnomes from near-extinction. The armies of Khazard and the Tree Gnome Village can still be seen fighting after this, meaning that neither group will surrender to the other.

This "hunting" campaign is one of the facts that enraged Glough against the humans, leading him into his plan of killing the Grand Tree to provide wood for the production of ships to attack the human kingdoms (most likely including General Khazard's army) and putting gnomes as supreme rulers of Gielinor over the humans.

Khazard lent several of his highest ranking troops to aid Movario, a mage and scholar in the employ of his fellow Mahjarrat Lucien. These Elite Khazard guards were charged with guarding Movario's base, which contained Movario's highly secret research notes. Darve, another of Khazard's men, was charged with guarding Movario personally, although Khazard recalled Darve shortly before the Ritual of Rejuvenation.

The Ritual of Rejuvenation[edit | edit source] 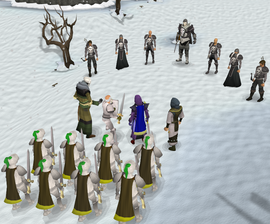 General Khazard, leading his troops into battle against a band of the Temple Knights.

General Khazard also brought a small band of his army with him to the 18th Ritual of Rejuvenation, where they ambushed the adventurer, Sir Tiffy, Akrisae, a small band of Temple Knights and Ali the Wise shortly before the ritual began. Recognising "Ali" as his fellow Mahjarrat Wahisietel, Khazard used a spell to reveal his true identity, and then proceeded to lead his troops in an attack on the group. While Khazard himself fought the adventurer, Wahisietel, and Sir Tiffy, his small band of Elite Khazard guards fought against the Temple Knights, being mostly ignored by the other participants. Eventually General Khazard was defeated, and with heavy casualties to both his troops and the Temple Knights, Khazard retreated, abandoning whatever remaining troops he may have had, choosing to protect himself for the remainder of the ritual.