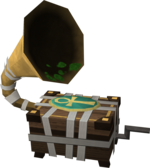 A Kharidian music box is an item that can be reclaimed for free from Diango. When placed by a player, it can be interacted with by dancing or listening to it. It plays an unlisted track. It may not be placed too close to a divination harvesting spot.

Unlike the achievement banner, another placeable item from Solomon's General Store, the Kharidian music box leaves your inventory when placed on the ground. It will remain in place after logging out and, if lost, can be retrieved from Diango in Draynor Village.

A player performing the Kharidian dance.