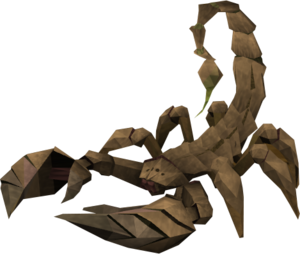 Kharid Scorpions are a rare species of scorpion native to the Kharidian Desert. They play a prominent role in the Scorpion Catcher quest, during which players must capture three that escaped from the wizard Thormac. Players can catch them during Scorpion Catcher with a scorpion cage. Locations are as follows:

None of these scorpions are attackable. If players attempt to pick them up, they will always suffer 30 damage. This damage is fatal if one has 30 life points or less when attempting to pick one up. The scorpion damage is not poisonous, though is incapable of being blocked by any of protection prayers like Protect from Melee. It is rumoured that some players have died because of lag, as they have attempted to pick one up at moderately low life points under lag not aware that they deal out 30 life points at a time. Some players also use them as a form of suicide when they have low life points or are in need of stat restoration.