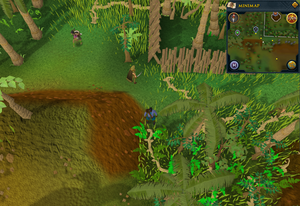 This spot is the easiest way to enter the jungle from Shilo.

The Kharazi Jungle is an area south of Shilo Village on Karamja. Legends' Quest is required to enter and is the main location for the quest. A map is required to navigate, and a machete and hatchet required to hack through the dense jungle blocking the path. Adventurers must complete the map of the area and obtain a gilded totem from the area to gain access to the Legends' Guild.

The jungle is home to the Kharazi tribe and several species of wolves, birds, and other animals, most of which are aggressive. To the north-west is the entrance to the Kharazi Dungeon which has a role in the Legends' Quest. Along the southern beach are several vanilla plants which produce vanilla pods, an ingredient in brulee supreme which is used to free Sir Amik Varze from the Culinaromancer's spell during Recipe for Disaster.

Roughly in the centre of the jungle is a pond with special water with a patch nearby for planting yommi tree seeds. There are also several black totem poles which must be disposed of.

The jungle is used in Karamja Tasks concerning deathwings, oomlie wraps and palm leaves. A palm leaf can be retrieved by shaking the leafy palm trees to the east and west of the small pool in the centre of the jungle. When shaken, a leaf will appear on the ground.

There are several teak trees and some mahogany trees scattered across the jungle, with plenty of open space to make fires. With a tinderbox in the inventory or tool belt, players can chop the teak trees and burn them without leaving the jungle. However, the creatures there are aggressive, so it would be wise for players to bring some armour and perhaps a ring of life.

It is possible to hunt some creatures here to make into pets. Baby monkeys and red baby geckos can be caught here.

The jungle occasionally serves as the location for hard co-ordinate and elite scan Treasure Trail clues.