From the RuneScape Wiki, the wiki for all things RuneScape
Jump to: navigation, search
Kethsian forge? (edit) 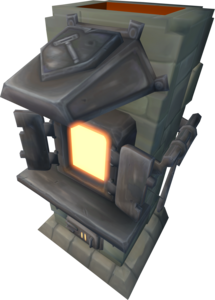 Kethsian forges are forges capable of being used in conjunction with the nearby Kethsian anvils to smith projectiles made of banite ore which have been tuned and smelted. They can be found on the Isle of Sann and Mount Firewake in Kethsi. The forge on the Isle of Sann can be accessed during and after Ritual of the Mahjarrat using the fairy ring codes DIR followed by AKS. It can be found (from the fairy ring) after going up the ramp, jumping across the space to the west, then crossing the fallen spire. The anvil should be on that particular section of floor.

Another forge can be found on Mount Firewake (accessed via the World Gate after both Ritual of the Mahjarrat and Fate of the Gods.

Kethsian anvils and forges cannot be used to smith items that can be worked at normal anvils; they are used exclusively to smith the following items, which cannot be worked elseewhere.