From the RuneScape Wiki, the wiki for all things RuneScape
Jump to: navigation, search
The Old School RuneScape Wiki also has an article on: osrsw:Ket-Zek
This article is about the Fight Cave monster. For the Fight Kiln monster, see TokHaar-Ket-Zek. 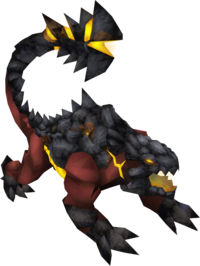 The Ket-Zek is a monster found in the TzHaar Fight Cave and are the second highest-level creatures encountered there. They appear first in wave 31, and 2 will be encountered the wave prior to TzTok-Jad, the strongest and final creature fought in the caves (62). They are also encountered in The Elder Kiln and The Brink of Extinction quests.

Killing one of these is a required hard task in the Karamja Diary. Killing the one found in the two TzHaar quests mentioned above will not go towards the task; you must kill one in the Fight Cave to finish the task.

It uses powerful magic and melee attacks, but will only use the melee attack if you are already within melee range. For this reason, the prayer Protect from Magic is recommended, as providing you aren't in its melee range, you will only have to compensate for its magic attacks. The magic attack consists of the Ket-Zek flinging something that looks like a fireball at you with its tail. 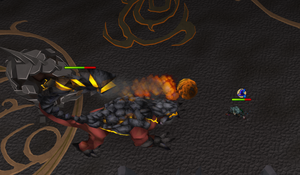 Using a Ket Zek as a safespot

Be careful as this monster hits through prayer quite accurately and has a long range.

Ranged attacks or Halberds (if your Ranged isn't your best combat skill) are the ideal tools for killing this monster as it eliminates its melee attack; however, using a high level melee weapon without the ranged advantage like Halberds have can make things much faster by hitting after a magic attack and immediately taking a step away, however, this is only recommended after you have memorized their attack speed (they hit at the same speed as a whip), as one mess-up could make you waste a large amount of supplies or even cost you the entire cave altogether. They are weak to arrows when encountered in the Fight Cave minigame, so you should aim ideally, to bring the best bow you can use.

With Legacy mode released, the Ket-Zek has become more dangerous in the Fight Cave. It is now capable of consistently dealing about 1k damage each hit with protection prayers on so it's highly recommended to safespot or take down Ket-Zeks as quickly as possible. This was confirmed by Mod Selfie to be intended and not a glitch on the forums. [1] However, with an update on 18th August 2014, the damage the Ket-Zeks do has been drastically reduced meaning it is much easier to complete the Fight Cave now. They still pose a threat to unprepared players and should therefore not be underestimated.