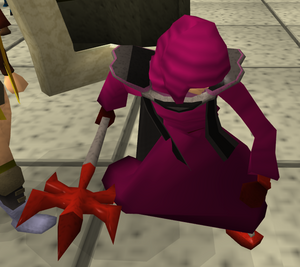 A player demonstrating the glitch.

The Kennith's Concerns death glitch occurred when a player died when sneaking past the guards in Kennith's Concerns. Normally players could not die during this part of Kennith's Concerns, but some players were able to kill themselves using nitroglycerine, which allowed them to go anywhere in RuneScape in this position.

Though it was originally thought of as harmless to the gameplay of other players, it was quickly discovered that it could be used to safe-guard items that would normally be dropped upon death since dying after using this glitch would return you to the entrance of the rubium mine with all of your items still intact instead of the normal death sequence. Some dishonest players took advantage of this by using the glitch to safeguard their items in Bounty Hunter, thereby removing the risk of losing one's items to another player killer. This was quickly fixed by Jagex.