From the RuneScape Wiki, the wiki for all things RuneScape
Jump to: navigation, search
Kennel? (edit) 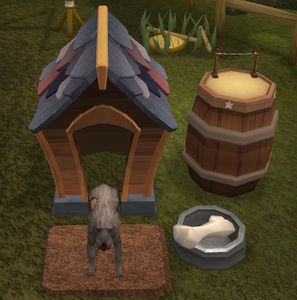 Kennels are small dog houses holding one of four stray dogs in, either Oddie, Little 'Elper, Patch, or Sir Chen Rescoo, which are chosen as part of the 2012 Christmas event reward. It has multiple decors, including the kennel itself, a bowl, a mat, a flea circus, and chew toys. Only one of each can be used at a time. They come in five different types: basic, red (Zamorak), blue (Saradomin), green (Guthix), and purple (Zaros). The customisations are acquired by opening active Gifts of Giving

A kennel can be built on one of four hotspots: near Aggie in Draynor Village, outside the Party room with Party Pete looking after it, next to Gertrude in Varrock or in Al Kharid by the Sorcerer's Apprentice.