From the RuneScape Wiki, the wiki for all things RuneScape
(Redirected from Keldagrim palace)
Jump to navigation Jump to search
The Old School RuneScape Wiki also has an article on: osrsw:Keldagrim Palace

Keldagrim Palace, also known as The Consortium Palace, is a massive central structure found in the dwarven capital city of Keldagrim. The Palace plays key role in the city's governing, housing the eight companies that make up the Consortium. It is also an important centre of trade, both amongst the companies and the city's residents.

The palace is amongst the oldest structures in Gielinor, having been built during the city's early days approximately 6,000 years ago. Today it continues to stand, serving as a constant reminder of the Consortium's power and the ingenuity of the dwarves.

Amongst players, the palace is noted for its large marketplace, where players can train their Thieving skill. It is also important as a means of transportation, being one of only two ways to cross the River Kelda without leaving the city. 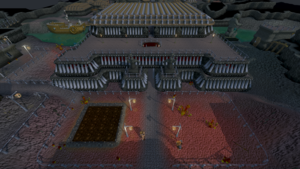 More than 6,000 years ago, following the defeat of Zaros and the banishment of the Mahjarrat Zamorak, the Third Age began. The gods and racial factions of the world, now able to act without incurring Zaros's retaliation, began to seek land and power. The gods' attempts to increase their followers' borders soon began to conflict, resulting in that would soon escalate to a 4,000-year long war that nearly destroyed the world.

The Era of Kings[edit | edit source]

A small clan of dwarves living in what is now the frigid Fremennik Province realised that the war, showing no sign of slowing, would soon force their race to extinction. Deciding they could not defend themselves against their many enemies, they secretly fled further east, to a massive mountain range on the border of the Province.

Here, beneath what is now known as Trollweiss Mountain, the dwarves established Keldagrim, a small underground city that would serve to keep them safe as they waited out the wars that raged on the surface.

As they hid, Keldagrim began to grow and flourish. Forsaking the surface, the dwarves lost all contact with anyone outside the city, a time that would be known as the Era of Kings. Using magic for the last time, the dwarves began construction on a massive palace spanning the River Kelda that divided the city. Here the dwarven monarchy would make its home for almost 5,500 years.

The Rise of the Consortium[edit | edit source]

Some 500 years ago, King Alvis of Keldagrim established the Consortium, a collection of eight powerful dwarven companies that would help to serve the monarchy in its management of Keldagrim's growing economy.

By the time of King Alvis's death, however, the Consortium had grown more powerful than the monarchy. It was decided that, with the monarchy now lacking any significant power, the city's kingship would be abolished and replaced with a company government. To facilitate this, the dwarves renovated much of the palace, creating a large meeting area on the palace's top floor and establishing the Trade Octagon and office area on the first. 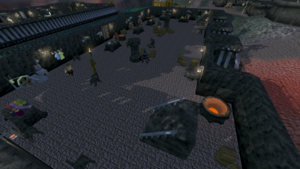 Keldagrim's indoor marketplace, a hive of traders and shoppers.

Under the Consortium, Keldagrim would flourish, entering the Era of Prosperity. Today, with Keldagrim now in contact with human, the Palace continues to be an incredibly important part of Keldagrim.

Keldagrim Palace's design is unique, with less than half of the structure actually built on solid ground. In order to facilitate the massive freighting the Palace has been built in such a way that its main body is far above the water's surface. Against it stands the colossal statue of King Alvis, constructed hundreds of years ago following his death.

The Palace's ground floor[UK]1st floor[US] is by far the most public, though it is divided by the Kelda. On the west side of this floor several high-end shops can be found, whilst outside its doors can be found the Palace's gardens. On the east is a bustling marketplace that plays host to many stalls and shops.

The 1st floor[UK]2nd floor[US] is the true home of the Consortium, where eight office cubicles can be found. Also found here is the Trade Octagon, where the Consortium trades goods and services amongst itself.

The Palace's top floor is used only by the Consortium, where its directors converge to conduct important meetings and make decisions. The Palace's ground floor[UK]1st floor[US] is perhaps its most important. On the west side can be found several high-end shops, including Agmundi Quality Clothes, Vigr's Warhammers, Wemund's Wrench Warehouse, and Gunslik's Assorted Items. In Wemund's shop can be found an anvil, although a more convenient one can be found further west near the city's bank. Several individuals can be found simply wandering the area, the most notable of which is Professor Manglethorp, a gnomish professor from the Grand Tree.

On the east side can be found many more shops, including Keldagrim's Best Bread, Green Gemstone Gems, Carefree Crafting Stall, a Crossbow Shop, the Silver Cog Silver Stall, and Vermundi's Clothes Stall; all of which but the last can be stolen from using the thieving skill. The area is patrolled by the Dwarven Black Guard, the city's military and police force. The level 48 Black Guards that patrol the area will attack if a play is seen while attempting to steal from a stall.

The Palace's 1st floor[UK]2nd floor[US] is the home of the Consortium, and as of yet lacks many notable features. Worth seeing is the Trade Octagon, where the company's' traders can be found. The directors and secretaries on this floor will assign minitasks to players, potentially earning either coins or Crafting, Smithing, or Mining experience. At level 90 Thieving, players can also pickpocket the traders for noted ores and bars, as well as level 3 clue scrolls. Trade floor guards can also be fought here.

At one point, an activity icon was accidentally added to the Trade Octagon. Initially a moderator stated that an activity was planned for the area, but had been continuously pushed to the bottom of the developer's workload. The icon was later removed, and it has since been confirmed that the game was cancelled. 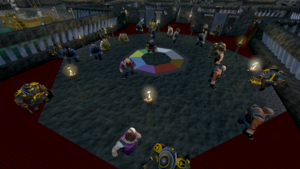 The Palace's topmost floor is very empty, although it offers excellent views of the city's east and west sides. It houses the Meeting Octagon, where the Consortium meets, and the throne of Keldagrim's former monarchy. King Alvis's statue can also be seen from the area's balconies.

This information has been compiled as part of the update history project. Some updates may not be included - see here for how to help out!
Retrieved from ‘https://runescape.wiki/w/Keldagrim_Palace?oldid=35684012’
Categories:
Hidden categories: