From the RuneScape Wiki, the wiki for all things RuneScape
(Redirected from Karamja rum)
Jump to navigation Jump to search
The Old School RuneScape Wiki also has an article on: osrsw:Karamjan rumThe RuneScape Classic Wiki also has an article on: classicrsw:Karamja Rum
For other uses, see Karamjan rum (disambiguation).
Item JSON: {"edible":"yes","disassembly":"yes","stackable":"no","stacksinbank":"yes","death":"never","name":"Karamjan rum","bankable":"yes","gemw":false,"equipable":"no","members":"no","id":"431","release_date":"11 June 2001","restriction":"surface","release_update_post":"The island of Karamja is open","lendable":"no","destroy":"Drop","highalch":12,"weight":0.907,"tradeable":"no","examine":"A very strong spirit brewed in Karamja.","noteable":"no"}

Karamjan rum is the local drink of Karamja. It can be bought from Karamja Wines, Spirits, and Beers shop on Karamja for 30 coins.

Drinking the rum lowers Attack by four, raises Strength by three, and heals 625 life points. Like other attack-lowering drinks (for example, beer), it will not unequip your weapon if your level falls below the requirement.

Members can use the rum on a piece of silk to create a cleaning cloth. 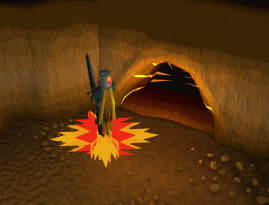 Karamjan rum is extremely difficult to remove from Karamja. If it is in the inventory when a player attempts to sail off the island, the customs officer will confiscate it. While a player can charm the Customs officer into not doing so while wearing the ring of charos (a), the player will still not be able to get it off the island as they dance for joy and the rum falls out of their backpack. Attempting to take the rum on the ogre boat results in the ogre kids saying that Rantz told them that rum is bad. If a player attempts to teleport with the rum in the inventory or use the player-grown spirit tree in Brimhaven, the rum bottles will instantly break (the same happens when attempting to enter a POH portal). When using the ship west of Shilo Village, you get the message: During the trip you lose your rum to a sailor in a game of dice. Better luck next time!

Nor can a player bring the rum to the bank in Shilo Village or TzHaar. A monkey will steal the rum if a player attempts to take the Shilo Village cart system from Brimhaven to Shilo Village, and if a player tries to climb over the broken cart outside the village, they will drop the rum, whether or not they climb the cart themselves or ask Mosol Rei to take them inside. The high temperatures in the volcano around TzHaar will make the bottles explode regardless if the rum is in the player's inventory or in their bank whilst the quest is active. Upon disappearance, players receive a message in the chatbox, "Why is the rum gone?" This is a humorous reference to Pirates of the Caribbean.

Using the gnome glider in the southeast will result in Captain Klemfoodle fooling the player and stealing the rum from them.

The primary method is the one used during Pirate's Treasure. Players obtain a job at the local banana plantation, fill the crate outside the shack with bananas, and use the rum with the filled crate. Later they can retrieve it in Port Sarim. This can only be done during the quest.

Players can add banana slices to the rum or stuff a banana into the rum, resulting in Karamjan rum (sliced banana) or Karamjan rum (banana). They can be taken off Karamja with more teleportation but are useless items for Pirate's Treasure.

There are other methods to remove regular Karamjan rum from the island.