From the RuneScape Wiki, the wiki for all things RuneScape
Jump to: navigation, search
Kara-Meir? (edit) 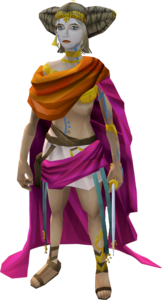 Kara-Meir is a young adventurer and co-founder of The Godless, a group of individuals who believe that the gods should be banished from Gielinor, a philosophy formed after the death of the god of balance, Guthix, and the abolition of his edicts.

She is also the central character in all three of the RuneScape novels, Betrayal at Falador, Return to Canifis and Legacy of Blood, playing a central role in the War of 164 and the conflicts thereafter.

Kara appears to be extremely knowledgeable, having extensive knowledge of various gods and even the Stone of Jas, making her one of the very few beings to have heard of the Stone.

In the novels[edit | edit source]

Kara-Meir was born in either year 146 or 147 of the Fifth Age, making her 23~ years old. Her birth parents were Sir Justrain, an exiled White Knight posing as a woodcutter, and an unnamed mother, both located in a village on Ice Mountain, which is now destroyed.

During her childhood, she helped nurse a bear cub back to health, and was taken to the Monastery of Saradomin, between the mountain and the Ghost Town by her father, to be blessed by the monks. However, in 155, whilst she was still an adolescent, an undercover Kinshra agent known as Sir Finistere tipped off the Black Knights to the whereabouts of Sir Justrain, inciting a raid on the village. Sir Justrain and Kara's mother were killed, but not before the latter gave Kara-Meir supplies and told her to run away, before being dragged by her hair out of the hut. The Kinshra released their dogs to chase after her, but she managed to escape to a small island in the middle of a lake.

Using her wits alone, she managed to kill a wolf, and crawl inside of its corpse in a last-ditch effort to keep warm. She stayed like this until she was discovered by Master Phyllis and his group of Dwarves, who were scouting the area in order to help survivors of the raid. Master Phyllis brought Kara in and adopted her as his own, giving her the name "Kara-Meir", which was ancient dwarvish for "Wolf Cub".[1] As his adoptive child, Kara learned the ways of the mountain dwarves, such as how to fight and how to make weapons. During her nine years under the mountain, Kara-Meir's eyes adjusted to the dark so well that she could see well in places even most destitute of light, much like the Cave goblins, but albeit on a much smaller scale.

The Siege of Falador[edit | edit source]

Kara-Meir wielding an Adamant longsword, as seen on the front cover of Betrayal at Falador

After her nine years under Ice Mountain, now roughly 17 years old, Kara-Meir set out to find the Kinshra. Before she departed, Master Phyllis gave Kara-Meir an adamant longsword to protect herself. Kara-Meir set out to defeat the Kinshra, but was almost killed in a fall if it wasn't for her father's ring of life her mother had put in the pack so long ago. She was transported to Falador, barely alive.

She was soon found by Squire Theodore of the White Knights during a massive storm and was put in the infirmary of the White Knights' Castle. Over time, she recovered from her ordeal and was strong enough to beat Marius, another squire of the White Knights. She later departed for Gunnarsgrunn when she found out that Sir Amik Varze was planning to use her as bait to reveal the traitor. There she met Castimir, Ebenezer and Gar'rth. She then participated in the Battle of the Monastery and the Siege of Falador, in which she severed the hands of Sulla, who was the Kinshra lord of that time.

After the Siege of Falador, Kara-Meir announced that she would go and try to find her mother's name and find her now destroyed village and put a marker. She plans to meet with her friends at Varrock on Midsummer's Eve. Ebenezer named Kara-Meir one of his heirs.

The following takes place during Return to Canifis.

In this novel in the series, Kara-Meir journeys to the Zamorakian realm of Morytania with her companions, including Sir Theodore and Castimir.

The following takes place during Legacy of Blood.

Not much is known of what happened between the events of Legacy of Blood and the beginning of the Sixth Age, although it is known that she continued adventuring and came into contact with a druid known as Biehn, who she corresponded with regularly via letter.

On Biehn's suggestion that she start travelling with others, she started an entourage, the first other member of which was a demon known as Ux. Unlike most demons, Ux had broken free of the Demon Pact that the god of control Zaros had created, and is seemingly friendly by demon standards. It is unknown how the two met, but he ended up travelling with Kara, hoping to take up arms against the gods Zamorak and Zaros.

The Death of Guthix[edit | edit source]

While Kara was touring Kandarin shortly after the murder of the God of Balance Guthix by the Zarosian Mahjarrat Sliske, Kara received another letter from Biehn. In it, Biehn announced his departure from the druids of Taverley, as he was always sceptical that Guthix would want humans to live as equals, while he was above them in every conceivable way. After being informed of Guthix's dying wish by Kaqemeex, Biehn felt a fog clear over his mind, and left the druids with Kaqemeex's blessing.

Biehn also mentioned that he had a proposal, and asked if Kara was interested in meeting up in person and discussing it. Kara was busy with her adventures however, and at her request Biehn instead posted his proposal to her. He proposed his intention to form a alliance known as the 'Antitheists', a group of like-minded people that wished for Gielinor to be free from the gods and to take up arms against them, and asked if Kara would be interested in helping him form it. Kara agreed that his were ideas progressive, and gave her support, saying she would protect Biehn, remarking that she wouldn't want him getting himself killed over a revolution. However, she also thought that "The Antitheists" was a terrible name, and instead suggested naming it The Godless, the name that Biehn eventually chose.

Kara mentioned that she would meet up with Biehn soon, as she was heading to Misthalin anyway, hearing rumours of a portal in the duchy of Lumbridge, which had given her companion Ux a headache, and he wished to destroy the source of it.

The following takes place during Battle of Lumbridge.

Kara-Meir during the Battle of Lumbridge

During the Battle of Lumbridge, Kara-Meir was found observing the battle from the east, near the Lumbridge lodestone. She explained to the player what was happening, with an unbiased opinion concerning the two sides to the battle. She is shown to hate the gods.

The Battle between Armadyl and Bandos[edit | edit source]

During the second world event, Kara-Meir was found near the crossroads north of Falador, near Garlandia. She explained what Armadyl and Bandos were doing, and when asked her opinion on what side to join, she would say to kill both gods or the stronger/weaker of the two. Kara-Meir can also help change your allegiance to the opposite god and gives more information on the godless and Sir Theodore.

Upon hearing reports of two gods feuding it out in Lumbridge again, she and Holstein arrived and came upon an absurd party contest between Brassica Prime and Marimbo. Kara-Meir proceeded to give a glorious speech talking about how all races would be liberated from the tyranny of the gods, only to be laughed at and humiliated. Brassica Prime pelted her with cabbages, while Marimbo and her followers pelted her with monkey faeces. She left Holstein in her stead while she departed to get herself cleaned up.

During the event of Tuska, Kara-Meir was not representing the Godless for the battle as she was busy observing the Godless actions else where, which she state was "important." After the death of Tuska, she arrived on her back with Garlandia and the Scopulus in order to protect the portal from Godly influence.

Kara-Meir has a very short temper, probably because of experiences as a child. She is willing to risk everything to save her friends, even if it means hurting their point of view.

Kara-Meir's fighting skills rival that to a White Knight squire, an adult werewolf, several Kinshra troops, and a lord of the Kinshra. She has some skill in melee as she is able to wield an adamant longsword and the Sunspear dagger.

Due to her nine years spent under Ice Mountain, Kara-Meir is able to see in the darkest of places, helping her when she battles Jerrod.

Kara-Meir may have a romantic interest in the werewolf youth, Gar'rth as they are both considered outsiders. Following their return from Morytania, Kara-Meir falsely claimed to have become Gar'rth's lover in an attempt to convince King Roald to have mercy. She also pretended to submit to Gar'rth during the Battle of the Salve, and when Gar'rth was exiled from Misthalin, Kara-Meir followed him into exile.

Ever since Master Phyllis found Kara-Meir on Ice Mountain, he adopted her and treated her as his own. He taught her how to fight and how to smith and teaching her many other things. When he was dying in the year 164, he had a dream about Guthix that led him to making a banner of a ring of life and a White Pearl and a vial with the Tears of Guthix.

Theodore, along with Gar'rth, was hinted to have romantic interest in Kara-Meir, despite his role as white knight which forbids taking a wife. She hints during the second world event that he is "no longer with us."

Transcripts Kara-Meir is the author or co-author of: