Kalrag is a giant spider encountered during Underground Pass and only needs to be fought during the quest, although players can kill it afterward. It must be slain in order to soak a player's Doll of Iban with Iban's blood, thus progressing the quest.

When players kill her, during or after the quest, a message appears saying "Kalrag slumps to the floor..." and the Blessed spiders in the room will try to avenge her and become aggressive and attack with ranged.

The blessed spiders nearby will attack you with ranged after you kill Kalrag.

It is recommended for the player to wear full rune or above so that the blessed spiders deal very little damage. It is possible to safe-spot Kalrag as she uses melee, so you could equip the bow and arrows you brought to pass the bridge in order to attack from a distance. After Kalrag is slain it is advised to leave immediately to avoid taking too much damage from the blessed spiders. 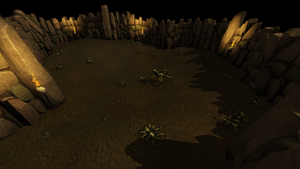 Kalrag and its offspring at the very bottom of the Pass.

This information has been compiled as part of the update history project. Some updates may not be included - see here for how to help out!
Retrieved from ‘https://runescape.wiki/w/Kalrag?oldid=35779939’
Categories:
Hidden categories: