From the RuneScape Wiki, the wiki for all things RuneScape
Jump to navigation Jump to search
The Old School RuneScape Wiki also has an article on: osrsw:Kalphite Larva

Kalphite Larvae are the first stage of development in the lifecycle of the kalphite, a species of large scarab-like insects native to the Kharidian Desert. They are at the lowest level in the Kalphite caste system and a member of the Kalphiscarabeinae family. The larvae, unlike its adult forms, is completely harmless to humans, and will usually retreat when it sights a human. They cannot be fought, although wily cats can catch them in much the same way as rats. This will keep the cat from becoming a lazy cat, although it yields no other reward.

Little is known about Kalphite larvae due to the species' highly aggressive nature. The only scientist ever to have successfully studied a larvae was Iqbar Ali-Abdula, a Kharidian scientist that was eventually driven insane by his research. Much of what is known of them comes from unprofessional observation or by comparing them to their closest relatives: scorpions, beetles, Misthalanian cave bugs, and scarabs. More information can be found in the Varrock Museum displays.

Larvae are born from small, brown eggs. These eggs are lain by the Kalphite queen, the leader of a Kalphite hive. Once a group of eggs are successfully lain, they are taken by kalphite workers, who raise the eggs in special nursery areas within the hive. These eggs will hatch quickly, each yielding a larva.

Larvae will develop quickly in order to ensure their hive is fully protected at all times. The exact nature of this development, though, depends on what level of the caste system they were biologically chosen to become at birth. Larvae will develop into either workers, soldiers, guardians or, in rare cases, a queen. Though there are large differences between the different species of the Kalphiscarabeinae family, the basic evolution process remains the same. 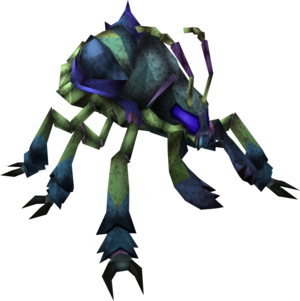 Kalphite workers such as this care for young larvae.

Larvae, regardless of what their role in the hive will be, begin the development process by growing six large legs, the two front of which are particularly powerful and designed specifically for tunnelling into the desert sands. Soldiers, guardians, and queens also develop spikes long the length of their legs, which they use for combat and additional maneuverability. At the same time, their soft bodies will begin to harden, gaining powerful plates on their exoskeleton known as lamellae. They gain a green colour at an early age, although its shade and patterns vary greatly based on what its role in the hive will be.

As they enter the late stages of development, the larvae will grow two large antennae, which they use to detect movement. The plates will continue to advance and harden, eventually gaining the ability to fan out and detect odors. If the larva is to be a queen, it will also develop powerful spines on its abdomen that can be thrown at foes by thrusting the body upwards. It will also develop a type of magical attack and a holy protection, hinting that the Kalphite may be connected to the desert god Scabaras.

Once fully developed, the now adult Kalphite will unquestioningly take up its role in the hive, building and fighting to protect its species.