From the RuneScape Wiki, the wiki for all things RuneScape
(Redirected from Kal'gerion dungeon)
Jump to: navigation, search 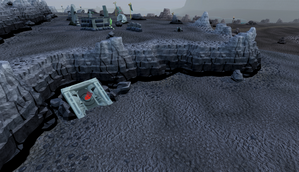 Using the hoardstalker ring obtained from Sinkholes, or using the Dungeoneering cape's perk, are the most convenient methods of reaching the dungeon. Players can also use the ring of kinship and run south-west of their location to reach the dungeon. It is also very close to the Wilderness entrance to Daemonheim, however players cannot pass into Daemonheim if they are in combat.