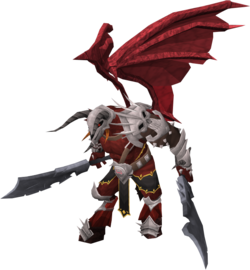 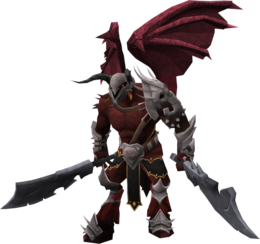 K'ril Tsutsaroth (pronounced KRILL TUTT-zee-roth[1]) is a demon currently stationed in the God Wars Dungeon, no longer frozen due to the tectonic movements in the Wilderness. He was summoned to Gielinor in the Third Age by the Mahjarrat Bilrach, and is now the commander of the Zamorakian armies within the God Wars Dungeon. To enter his camp, players must have 70 Constitution. To gain access to his chamber, players must kill 40 Zamorakians, unless the Totem of Intimidation is active on Anachronia.

When he swipes his target once each with his scimitars, he is using his melee attack. When he slams both of them onto the ground and orange flames appear, he is using his magic attack. When he slams both scimitars down and a cloud of black gas spreads out, as well as exclaiming "YARRRRRRR!" then he is using his special attack. K'ril targets one player, however, anybody standing on or one space near that player will also be hit and the damage will be divided between the players, so non-tanking players should stand away from the tank. This attack will drain half of the player's prayer points upon hitting and capable of dealing up to 6,600 damage, though it may be reduced as it is soft typeless damage. This special attack occurs more frequently if the player is using prayers.

K'ril is most often killed for the robes of subjugation, Zamorak hilt, and Zamorakian spear.

Obtaining all unique drops will unlock the [Name], Brawn of a Tsutsaroth title. 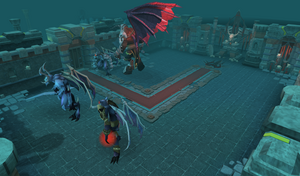 In his chamber, K'ril is accompanied and protected by three demonic bodyguards:

K'ril is a member of the Tsutsaroth tribe of demons. These were the ruling tribe of a race known as Avernics, which were the slaves of the ruling Infernals, then the Chthonians, until Zamorak led them in an uprising following his ascension. He was summoned by Bilrach to bolster Zamorak's forces.

K'ril was well known and feared in combat due to his immense strength. During the battle of Annakarl, K'ril personally fought Commander Zilyana. His sheer strength gave him the upper hand, and he mortally wounded her. K'ril took a single glance at his fallen adversary before returning to battle. Zilyana would survive her wounds, as Saradomin came and healed her with the Stone of Jas.

A flock of Aviantese were sent carrying the godsword blade, a fabled weapon that was rumoured to be able to kill gods. Zamorak, knowing the danger it posed to him, ordered his commanders to intercept them. They successfully did so, and the trapped Aviantese requested reinforcements to defeat the Zamorakians.

Each god sent reinforcements; Saradomin sent Zilyana, Armadyl sent Kree'arra, Bandos sent General Graardor, and Zamorak sent K'ril. Initially an uneasy three-to-one battle, Graardor betrayed Zilyana and Kree'arra in a bid to claim the godsword for Bandos. This resulted in Zilyana and Kree'arra now fighting both Graardor and K'ril. K'ril was accompanied by the demonic bodyguards Tstanon Karlak, Zakl'n Gritch and Balfrug Kreeyath, along with numerous low-ranked demons, werewolves, goraks and spiritual followers. Eventually, the situation deteriorated even further and resulted in a free-for-all for the godsword.

The magus Aeternam cast a powerful freezing spell on the temple, imprisoning the combatants within for thousands of years, effectively ending the war. K'ril was amongst those left imprisoned. Very shortly after this occurred, the god Guthix established the Edicts of Guthix, preventing the direct involvement of any deity in Gielinor. The departure of the world's Gods and the subsequent end of the God Wars meant that the cavern was forgotten for more than 2,000 years. Due to this, the demons of Infernus believed K'ril was killed, and another Tsutsaroth demon, Gree'gar, began calling himself Gree'gar Tsutsaroth, though this title was reserved for only the strongest of demons.

In the recent Fifth Age, investigations by both the dwarven explorer Nestor Peregrine and the Asgarnian Temple Knights nearly resulted in the cave's (and K'ril's) rediscovery. In 169, tectonic movement in the neighboring Wilderness caused large portions of the cave to defrost, eventually leading to the release of most of the cavern's population. Unaware that the God Wars have ended, K'ril and the rest of the battle's leaders have resumed the battle for the godsword once again, seemingly unaware that centuries have passed since the end of the wars.

During the quest The World Wakes, K'ril, along with Zilyana and Kree'arra, discover that an adventurer had found Guthix's resting place. He was the third general to arrive, ignoring Zilyana's warnings and simply barged through the first door, prompting the Icyene commander to chase after him.

After Kree'arra was defeated, the adventurer found K'ril and Zilyana at another door, which the demon was unable to break down. Zilyana taunted K'ril over his supposed lack of strength, prompting K'ril to remind her of their encounter at Annakarl. K'ril expressed suspicion after the Icyene stated that she would work with him, believing that she would betray him as he tried to force the door open. Although he begrudgingly agreed to work with her, he stated that he would be the one to kill Guthix.

He was third party to launch an attack on Guthix's chambers, summoning a group of demons to assist him in his efforts. After being informed by the adventurer they had defeated Graardor and Zemouregal, K'ril simply laughed, believing that they were not worthy opponents, considering Graardor to be a lumbering fool, and Zemouregal for lacking physical strength, deciding to destroy the adventurer and their weak companions first, as Zamorak would recognise him above all others when he returned. K'ril severely underestimated the adventurer, and despite his efforts, he was defeated, but warned them that now that he knew of Guthix's resting place, the balance god would never be safe as he retreated.

Guthix would eventually be killed by the Mahjarrat Sliske, allowing Zamorak to return to Gielinor.

Following Guthix's death, K'ril accompanies his god to the Empyrean Citadel, though he is forced to remain outside as he was not invited for the event. Recognising the adventurer (now the World Guardian) from before, K'ril may be asked about his thoughts about the Battle of Lumbridge and the fight in Guthix's chambers.

K'ril makes a minor appearance in Zamorak's Daemonheim headquarters as part of the Twin Furies' memory. He delivers his report to his god regarding the battle in the Temple of Lost Ancients. Zamorak is content with his report, and K'ril returns to the battlefield to oversee his forces.

K'ril was soon ordered by Zamorak to head to Senntisten to defend him and the other gods from the Elder Gods' forces. By this time, unaffiliated adventurers had found and assembled the godsword, making the fight at the Temple of Lost Ancients pointless and all forces withdrew from the area. At some point, he had learned from his fellow demons that a Tsutsaroth demon named Gree'gar had taken his title from him.

While K'ril was less than content to work with those he despised, he nonetheless came for the thrill of the fight. He began slaying numerous Nodon dragonkin, stating his actions would show Gree'gar who was the real Tsutsaroth, explaining to the World Guardian that the title was meant for only the strongest of the demons and that he would show his strength by serving his god and slaying the minions of the creators, whereas Gree'gar was doing nothing on Infernus.

While the Nodon were able to advance deeper into the alliance's lines, K'ril remained where he was with a pile of slain dragonkin around him.

The following takes place during Eye of Het II (miniquest).

Following Zamorak's departure from Senntisten, K'ril remained behind. He was confident that Zamorak had placed faith in them and stated that he would remain in the city until he was ordered to leave.

The following takes place during Daughter of Chaos.

Following the gods' banishment from Gielinor, K'ril took matters into his own hands and declared war on Bilrach, causing a civil war among the Zamorakians.

When in battle, K'ril shouts several battle cries while fighting the players that dare to venture into his chambers: 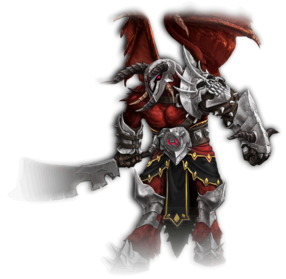 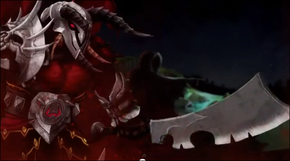