From the RuneScape Wiki, the wiki for all things RuneScape
Jump to navigation Jump to search
Jutting wall? (edit) 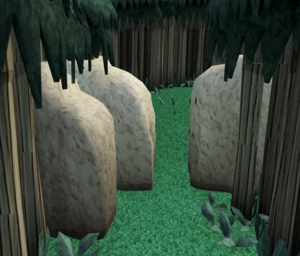 The Jutting walls are Agility shortcuts to the Cosmic altar in Zanaris and in the Meiyerditch Laboratories dungeon, near the entrance to the Tomb of Ivandis. There is always a "Damaged wall" opposite of it, with a narrow path in between. The eastern shortcuts requires 66 Agility to pass through, and the west one requires 46 Agility. To get to the Cosmic altar more quickly, players with sufficient Agility can squeeze past the jutting walls; if they fail, they will continue through but spears will dart suddenly out of the suspicious holes, impaling the player twice for 20 life points each.

There is currently a glitch that may cause the spears to be invisible. Damage is still dealt.

This information has been compiled as part of the update history project. Some updates may not be included - see here for how to help out!
Retrieved from ‘https://runescape.wiki/w/Jutting_wall_(Zanaris)?oldid=35751258’
Categories:
Hidden categories: